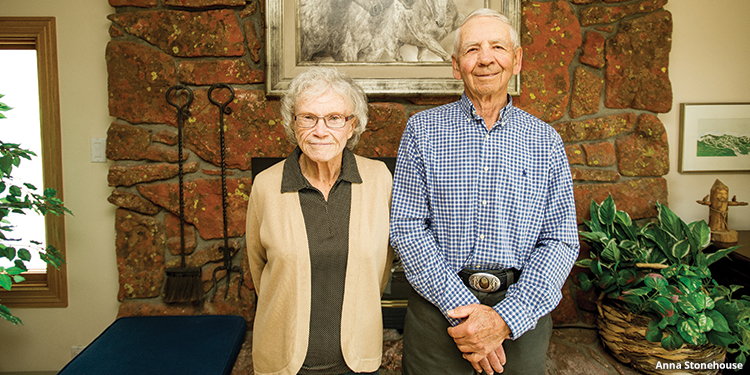 Arthur “Art” Bowles and his wife, Pauline, have got history — lots of it, especially regarding the Fryingpan Valley and Basalt.

Pauline — who said her age is “a little bit younger than Art” — has the distinction of being the first woman to serve as Basalt’s mayor. After she and Art sold Woods Lake Resort in 1970, they moved to Basalt full time.

She transferred her energy into town government. She spent her tenure dealing with hippies, roaming dogs and trouble at the Midland Bar, she said with a laugh. Even then, there were concerns about growth. Pauline wanted to maintain the status quo rather than promote projects that would change the character of a sleepy town dominated by retired farmers.

“I thought it was the ideal community,” Pauline said. “I couldn’t understand why people wanted to move here and change it.”

She stuck to her convictions while serving in office, even when it meant opposing the views of some of her constituents and neighbors.

“I was terribly unpopular with a lot of people by ’74,” Pauline said with a mischievous smile and twinkle in her eye.

Art is a fourth-generation resident of the Roaring Fork Valley. He and Pauline have great-grandchildren, making them the seventh generation of the family living locally.

Art said his great-grandparents moved to the Carbondale area in the 1880s among the first wave of ranchers and farmers to settle in the area. Their son, Art’s grandfather, became foreman of the Big 4 Ranch outside Carbondale. Art’s dad was born in 1903 and worked as a young man on a ranch in Canyon Creek, part of Glenwood Canyon.

His mom and dad, Delbert and Thelma, moved up the Fryingpan as a young couple in 1927 and worked on the Biglow dude ranch, where the current gravel road to Savage Lakes trailhead splits off to the north of what is now the paved Fryingpan Road.

In 1929 or 1930, Art said, his parents bought property from the Biglows in the upper Fryingpan River Valley.

“They wanted to build their own little resort,” he said.

They started with five cabins and the family home, calling it Diamond J Ranch after their cattle brand. Art spent an idyllic childhood exploring the never-ending wilderness that surrounded the ranch, fishing the streams and taking backcountry pack trips on horseback. Many of the same families return to the resort year after year each summer. Many of them had children whom Art befriended.

Art said his dad was always fond of winter and used skis both for pleasure and, quite possibly, as a practical matter when undertaking winter logging. A hill right behind the Diamond J was perfect for alpine skiing. His dad built a half-mile-long rope tow using the chassis from a Chevy truck. People came from all over the valley to ski at Diamond J during the winters, he said. Families would bring gasoline when it was rationed during World War II to help operate the rope tow.

The Great Depression didn’t hinder the resort’s success and growth. It had regular clientele from families from Denver and Kansas who would stay a few weeks during summers. The Bowleses added cabins as their business grew.

They also got to know the operators of Woods Lake, an even more secluded resort tucked in the mountains and thick woods north of the Upper Fryingpan River Valley. When opportunity arose, Art’s parents sold the Diamond J and bought Woods Lake resort in 1947 with one of Art’s uncles.

Art went to school through seventh grade in Thomasville. He started taking the bus to Basalt in eighth grade. He graduated from Basalt High School in 1948, one of eight in the class.

He recalled that his family would travel through the 2-mile-long Carleton Tunnel, part of the old Midland Railroad, to buy groceries in Leadville, which offered a greater selection than Basalt. The tunnel has since been renamed the Busk-Ivanhoe Tunnel and has been incorporated into the transmountain diversion system.

Pauline said she had a good friend who got her a job at Woods Lake Resort during the summers in the early 1950s while she was attending Colorado State College. She worked first as a cabin girl, then a waitress and finally as a laundress. She was working her second summer when she met Art, who returned home after serving in the U.S. Air Force. They were married in 1955.

Art’s dad died unexpectedly at a young age in 1958. Art and Pauline bought the resort from other family members in 1962 and ran it for the next eight years.

“It was pretty hectic,” Pauline said.

They had strong, repeat business in the summers and an active hunting season. Art said some of their customers were extended families that visited the secluded resort for 35 years.

The Bowleses would stay at the resort for half of the year with their twin daughters, Jacque and Jill, and move down to their home in Basalt during winters. Art supplemented his income starting in 1961 by farming out his family’s snowcat to the Aspen area’s young but blossoming ski industry. He used the cat to pull a wooden, slatted roller to groom the slopes at Aspen Highlands. Whip Jones, Highlands’ founder, was among the innovators of the industry by starting grooming so early, Art said.

The next winter, Art drove the snowcat at Snowmass ski area before the chairlifts were installed. He spent the first winter observing snow conditions on different parts of the mountain — collecting essential information that Aspen Skiing Corp. officials needed prior to opening the ski area. Art befriended Ski Corp. President DRC Brown and recalled taking Brown and a party of skiers to near the top of Mount Sopris on a powder tour in April that winter.

Art drove for commercial snowcat tours for the Ski Corp. starting in 1963. Two cats would stage down at the Victorian structure near what is now the Snowmass Center. They would shuttle skiers for two or three runs on the Big Burn, eat lunch at the shoulder of Sam’s Knob and then ski the face of Sam’s Knob in the afternoon.

The Big Burn was significantly different then, with countless standing snags of burned trunks of trees and an incredible amount of deadfall, Art said.

When Snowmass opened in 1966-67, Art was placed in charge of grooming and snowcat operations. He and members of his staff tinkered in the shop with corrugated pipe rollers that could be used for grooming.

That laid the foundation for a company that prides itself on excellent grooming of slopes.

The Bowleses sold Woods Lake to a group headed by Art Pfister in 1970. The longtime resort was converted into a private getaway. The Bowleses moved permanently to Basalt. Art went to work full-time for the Ski Corp. as head of trails. For Pauline, politics beckoned. She ran unopposed for mayor in 1972.

“We laid new water line downtown, which badly needed replacing. We cleared the title to the cemetery, set up a new Police Department and did the first planning for the town,” Pauline said. “The council and myself chipped in our wages each month to pay Jerry Brown, a planner from Glenwood, to help us.”

Home Is Where the Heart Is

Snowmass has always been known for its wide-open expanses and seemingly endless number of trails. That open feeling was magnified in the early days.

“It’s like the whole environment in this valley — just more people (now). There’s a lot more going on,” Art said.

In 1977, Brown asked Art if he wanted to manage the Breckenridge ski area, which was then in the Ski Corp.’s fold. Art intended to go for one year to see if he liked it. He stayed for 14 years at what became “the big moneymaker” for the ski company. He retired from the business in 1991, and the Bowleses moved back to their Basalt home.

They keep a lower profile than they did in the past. Pauline avoids politics. Art visits Snowmass as a customer rather than an operator. They still spend a considerable amount of time in the Fryingpan Valley, where they kept property.

Art remembers the days when Fryingpan Road was unpaved and the upper valley wasn’t carved up by roads associated with the water-diversion-system infrastructure.

“It was wilderness all around,” he said.

But they still love the relatively unsettled valley.