For the Love of Water 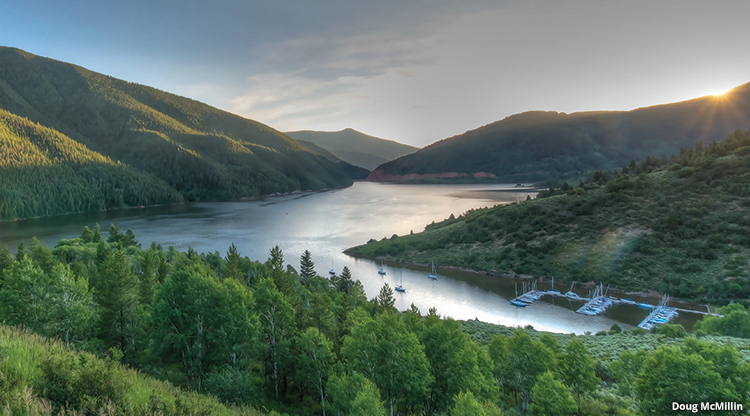 At first blush it might seem ironic that one of the biggest attractions in the mountainous terrain surrounding Basalt is a body of water.

But Ruedi Reservoir has been a true oasis for 50 years. The reservoir was constructed in 1968 as part of the Fryingpan-Arkansas Project to compensate for water being diverted to the Front Range.

Water politics aside, the 1,000-acre reservoir’s biggest contribution has been as a recreation mecca for water lovers — boaters of all types, sailors, water skiers, jet skiers, wake surfers, anglers, paddleboarders and, for those brave enough to dip into the snowmelt-fed water, swimmers.

“When people get into Ruedi, they really get into it,” said Bruce Gabow, a longtime resident of the lower Fryingpan Valley and a member of the Aspen Yacht Club for nearly 40 years.

Back in 1980, there were only eight or nine slips for sailboats and the fee was $50, he recalled. “It was mostly old ski instructors, originally,” he said.

Now there are 50 slips and the cost is about $1,000. The membership has grown to about 75, including dedicated sailors and people who just like hanging on their boats in the bay. “Some people spend every day up there, every day they can,” Gabow said.

The selling points of Ruedi are many and varied.

“It’s gorgeous, for one,” said Mark Asher, an Aspenite who camps on the shores of Ruedi just about every weekend with good weather during summers.

The lower Fryingpan canyon is somewhat boxed in, especially the last few miles before the dam. Then the valley opens up 13 miles east of Basalt and the long, narrow reservoir comes into view. Thick evergreen forests come down to the red rock lining the blue waters. The snow-capped Continental Divide looms in the background creating one of the most stunning vistas in the region.

On Friday afternoons and Saturday mornings, a parade of boats make their way up the valley to the Ruedi marina.

“More so than anything, it’s proximity that makes it so popular,” Asher noted.

Ruedi is the only major reservoir in the Roaring Fork Valley, so for people who love water sports, it’s a prime destination.

A survey conducted for the Roaring Fork Conservancy in 2014 as part of an economic study showed that 57 percent of individuals at the Ruedi marina undertook motorized boating while 23 percent were there for non-motorized boating. In addition, 23 percent participated in water sports such as water skiing or jet skiing, 24 percent were fishing from shore and 22 percent were fishing from a boat. (Respondents could list multiple activities.)

Half of the respondents said they camp when they visit Ruedi. For many people, camping is a vital ingredient in the Ruedi experience.

He’s part of a group that varies from 10 to 15 people any given weekend, usually including his two boys.

Somebody from the group typically ventures up there on Thursday nights to claim camp spaces. Some folks sleep on their boats but enjoy dinner and a few beverages around the campfire with the group.

Asher started camping at Ruedi about 10 years ago. While hanging out with friends and family he caught the itch to get a boat.

“We’d be on the beach, look out on the water and say ‘Why aren’t we out there?’” he said. He and a friend bought a boat together about three years ago.

“Now that we’ve got the boat we’re out there every weekend,” he said.

His niece Shannon Asher fell in love with the Ruedi scene when she moved west from Iowa a couple of summers ago.

“I feel like a kid at summer camp,” she said.

When she was initially introduced to Ruedi, it was with Mark and a few of his friends. She started bringing her own friends up with her every weekend and building a summer ritual. There’s a big, happy family at Ruedi because so many of the same folks return each weekend. 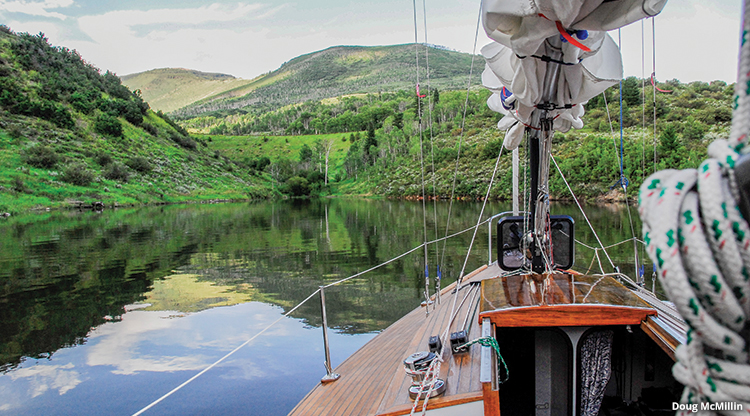 “There’s so many characters up there,” she said. That includes a woman known as The Queen of Ruedi, who doesn’t have a boat of her own but is so well-known she has no trouble hitching a lift.

A side benefit of a weekend at Ruedi is that there is no cell service. “You totally get off the grid,” Shannon said.

The Ashers and their crew are particularly enamored with wakesurfing. A person on a surfboard gets towed from the boat by rope. Once the boat’s wake grows big enough and the surfer is properly positioned, they let go of the rope and surf along hands-free, Shannon said.

The U.S. Forest Service boat ramp and campgrounds typically open for the season in early May. All visiting watercraft are inspected for zebra mussels and other invasive species that have infiltrated western U.S. waterways.

There were 5,500 total boat inspections at Ruedi Reservoir last summer, with 159 the highest single day, according to Mark Fuller, who is bowing out this year as executive director of the Ruedi Water and Power Authority.

He said the steady flows from the reservoir have created an ecosystem unlike those found elsewhere in the Roaring Fork River basin. The presence of the reservoir prevents flooding flows during the spring runoff, so the vegetation is better established along the lower Fryingpan than it is on stretches of the Roaring Fork and Crystal Rivers, he said.

The reservoir, of course, also helps create the ideal conditions for rainbow, brook and brown trout on the lower river. That, in turn, draws bald eagles, osprey and other raptors that thrive on the biomass.

Human visits to the reservoir spike during June, July and August. Gabow noted that Ruedi used to attract swarms of windsurfers, but that’s died out. By his reckoning, stand-up paddleboarding has become the fastest growing undertaking at the reservoir.

The water level usually peaks around July 4. While the water level is fairly consistent during the summers, surface conditions can be notoriously brutal. Smooth water can transform to monster waves in five minutes, Gabow said. Sailors from the Aspen Yacht Club keep a wary eye out in late morning for changing conditions.

The Gold Medal waters of the lower Fryingpan River will always overshadow fishing on Ruedi Reservoir. Roaring Fork Conservancy’s economic study showed 62 percent of anglers surveyed on the lower river were from Colorado but outside the Roaring Fork Valley while 18 percent were from out of state. The remaining 20 percent were local residents. 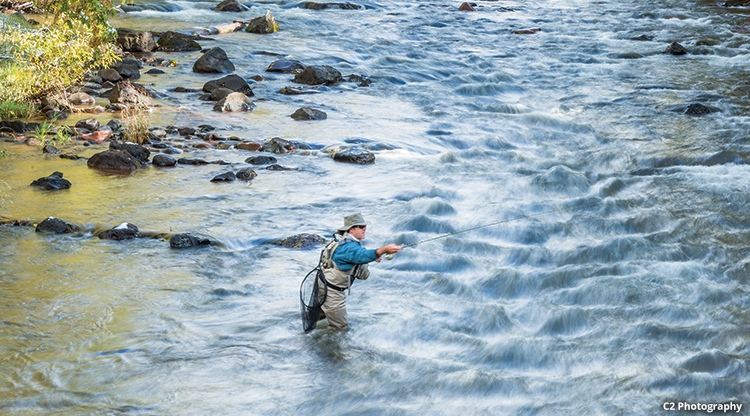 Ruedi fishing has its fans. It’s got the reputation for harboring humongous lake trout that range from 18 to 30 pounds, said Rick Lofaro, executive director of the Roaring Fork Conservancy and an avid fisherman. Some anglers use sonar and depth finders to seek the holes where the monster fish hang out. Once the lake trout reach a certain size, they only eat other fish, which is what makes them so big.

“They’re kind of like mini-Great Whites out there,” Lofaro said.

Despite the diversity of uses — from wakesurfing to canoeing and from camping to fishing — and the increasing numbers of visitors, the Ruedi faithful say there’s room for any everyone. The power boaters live in harmony with the sailors.

“The lake is pretty big and even on the most crowded days, it’s not very crowded,” said Gabow.

Enjoy a retreat in the peace and beauty surrounding the Fryingpan River Valley, while feeling right at home at Dallenbach Ranch, Lodge at River's Edge, and Taylor Creek Cabins. For those wanting to stay closer to town, the Basalt Mountain Inn and Frying Pan River Inn are located in the heart of historic Downtown Basalt. 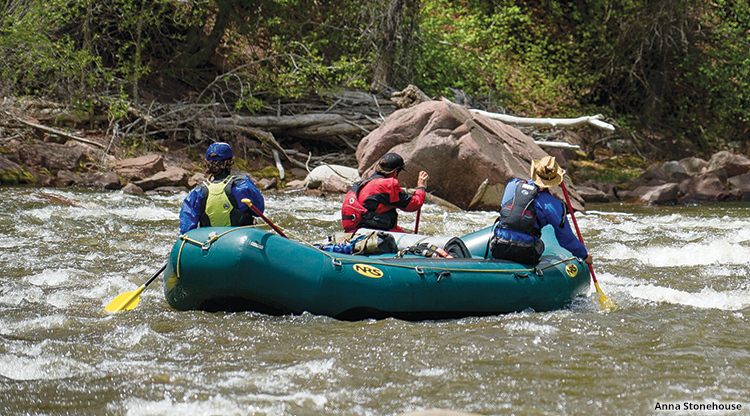 A whitewater park on the Roaring Fork River in Basalt offers thrills while protecting wildlife and water.

Last summer Pitkin County Healthy Rivers and Streams debuted a new whitewater park in Basalt. There are two main features, which are about three-quarters of a mile upstream from the Roaring Fork’s confluence with the Fryingpan River. The upper feature creates a hole, while 100 feet downstream is a feature that produces a wave, designed with stand-up paddleboarders in mind. The whitewater park provides another option in the Roaring Fork Valley for kayakers and stand-up paddleboarders, encouraging greater use of the middle Fork for recreation.

Each section behaves differently depending on the river flow level. By most estimates, the Basalt whitewater park worked best at flows in the range of 900 to 1,000 cubic feet per second. This winter a “sneak path” was created so river runners now have the option of bypassing the features, particularly during high runoffs.

The project is much more than a kayak play park - it secures a future that keeps seasonal flows in the Roaring Fork, maintains healthy river ecology, adds to the diverse recreational resources, and creates an opportunity for citizens of Basalt, Pitkin County, and the entire Roaring Fork community to enjoy the valley’s river in new ways. During non-boating months (typically September through May) the features provide fishing access with enhanced habitat due to the enlargement and deepening of the pools below the features. Pitkin County used the whitewater park as a way to secure water rights for the benefit of recreation. Establishing that junior water right could prevent further diversions and provide more water for that stretch of the Roaring Fork when available. 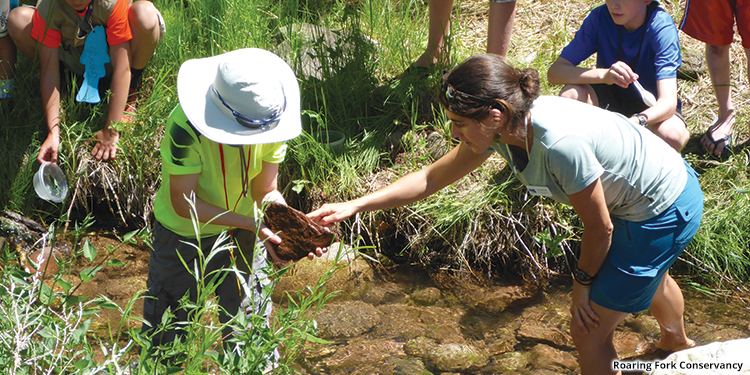 Roaring Fork Conservancy (RFC) is one of the largest watershed organization in Colorado. Since 1996, the RFC has inspired people to explore, value and protect the Roaring Fork Watershed through our watershed education, science, and policy programs.

Over the past 21 years, the non-profit has taught over 110,000 students of all ages, conducted over 53,000 water quality tests to determine stream health, and forever protected over 300 acres in riparian land conservation easements. In addition, the RFC is doing even more to cultivate people’s relationship with water by fostering a cultural ethic that values water, rivers, and watersheds.

The Roaring Fork Conservancy invites you to its new headquarters – The River Center - part education center, part research hub, part environmental action center, and part community gathering location. The River Center provides a cutting edge opportunity to protect rivers in the west at a time when the public is only beginning to grasp the true value of water.

Want to learn more about water’s amazing journey in the west, or would you like to cast a fly rod or tie a fly, or perhaps you are interested in transbasin water diversions? The RFC invites you to visit The River Center on Two Rivers Road in Basalt. You are sure to be inspired to learn more about your home watershed!