You’ve been there. Driving down the highway when you see a billboard or a hand painted sign: World’s Largest Ball of Twine (Kansas). Lucy the Elephant (New Jersey). House on the Rock (Wisconsin). Strange roadside attractions are such a uniquely strange part of American culture that we often don’t think twice about them. They became popular in the early and mid-20th century, when long-distance road travel first became possible. They’re a staple of the American highway, and luckily for you, Colorado has plenty of its own to keep you entertained when you need to stretch your legs during a long drive. Here are just a few:

Well, it’s no ball of twine, but Saul the Sticker Ball is still pretty impressive in a unique way. In 2016, the sticker ball was nearly nine feet in diameter, but has grown since then. Located in the StickerGiant factory, you can take a tour to see how stickers are made, then stop by and see Saul, and slap a sticker onto his side to help him grow even more. 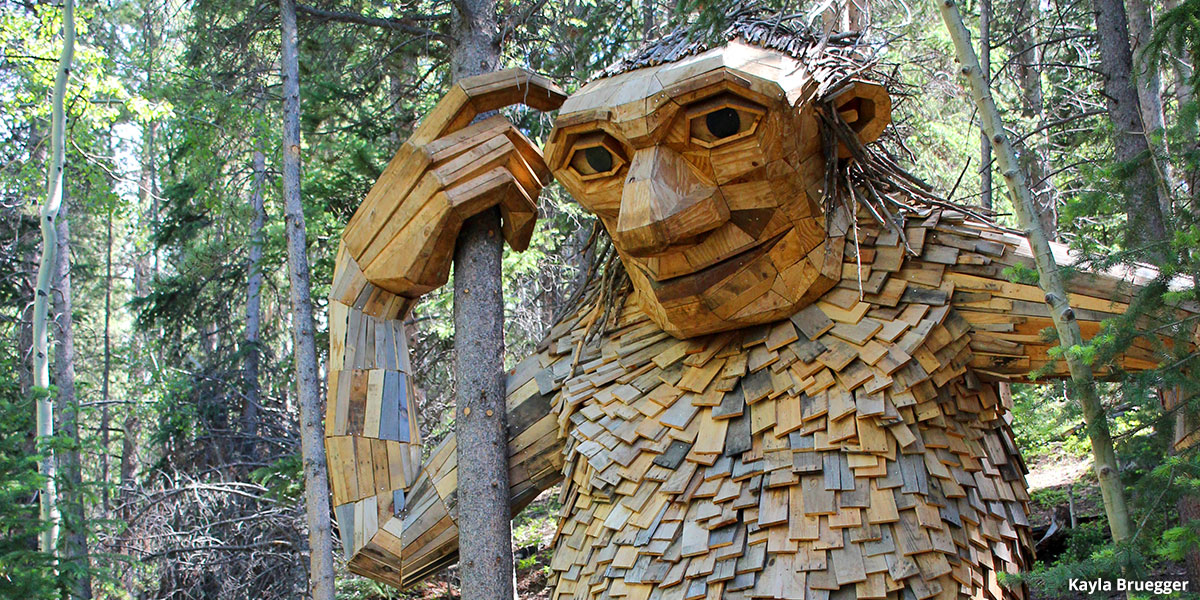 Isak Heartstone, as the 15-foot wooden troll is named, is more of a trailside attraction than a roadside one, but he’s quickly growing in popularity. Originally built for the Breckenridge International Festival of Arts in 2019, Isak Heartstone is part of a series of troll sculptures built by Thomas Dambo, a talented Danish artist who uses trash or recycled materials to create his sculptures. Follow the Trollstigen Trail to find Isak in his wooded, mountainside resting place, and snap a selfie for Instagram.

Bishop Castle is probably one of the most famous roadside attractions in Colorado. In 1969, when Jim Bishop was 15 years old, he began building a cottage on a plot of land he purchased for $450. He surrounded it with rocks, and when someone commented it looked like a castle, he took it to heart and continued construction, using rocks and stones he sourced from the San Isabel National Forest. The result is Bishop Castle, which even after more than 50 years is still being constructed by Bishop. It’s an impressive feat of one-man architecture that looks like something straight out of a fantasy novel, with towers, turrets, grand windows with views of the mountains, spiral staircases, and more. Pop in for a visit next time you’re in the region, and tour the exterior and interior on your own or maybe even with Bishop himself as a guide.

Four Corners might get all the credit for being a place where you can be in four states at once, but in the eastern plains, just off I-70, you’ll see a tall, dilapidated tower that claims to allow you to see six states. What you’re seeing is the World’s Wonder View Tower, which was built in 1932, and until 2013, you could go to the top of the tower and catch views of Colorado, Kansas, New Mexico, Nebraska, Wyoming, and South Dakota. The tower closed when the owner died, and its future is still uncertain, but in the meantime, it’s a fantastic conversation piece when you’re driving along I-70. 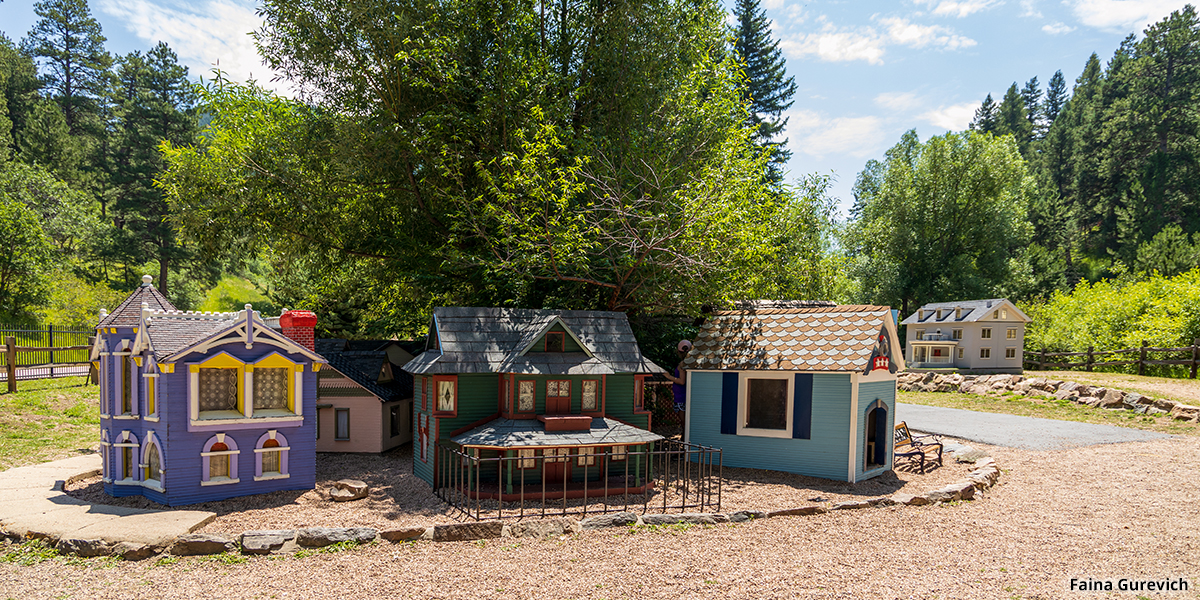 In 1915, George Turner began building Turnerville, a ⅙ scale village designed for his young daughter. As the years progressed, the little town grew to contain a grocery store, a barbershop, lakes, a hotel, school, church, and even a little pool hall. By 1924, it was a huge tourist destination. Tiny Town has faced a number of setbacks over the decades, including fires, floods, and the untimely death of its owner in the 70s when he was hit by a runaway train car, but despite the bad luck, it has persevered, and today it has over one hundred miniature buildings and even a miniature train ride.

Would this list even be complete without a mention of The Blue Mustang, a massive 32-foot statue near Denver International Airport? Fondly nicknamed “Blucifer” by locals, this statue of a rearing blue horse with glowing red eyes stands prominently near the airport to greet people as they depart or arrive in Colorado. Blucifer is an icon and a photo op, but he’s got a sinister backstory as well. In 1993, an artist named Luis Jimenez was commissioned to create the sculpture, but before it was finished, Blucifer fell over onto his creator, killing him under 9,000 lbs of weight when he severed an artery. The sculpture was finished posthumously by Jimenez’ friends and family, and installed outside DIA in 2008, where it has been watching over everyone with its terrifying gaze ever since.

This metal sculpture in downtown Fruita might look like a once-complete piece of art that has met some very serious vandalism, but no, Mike was always intended to be headless. Mike the Chicken is a Fruita legend, a chicken who, in the 1940s, was decapitated to become his owner’s dinner, but… didn’t die. For nearly two years, Mike survived as a headless chicken, and earned his keep as people flocked from all over to pay 25 cents for the privilege of seeing him in person. Mike traveled the country as a sideshow act until he choked on a piece of corn and died. To this day, Fruita celebrates an annual “Mike the Headless Chicken Day” each May, and you can pay him tribute by hopping off the highway to see the sculpture built in his memory.

Is Bigfoot real? Has it been sighted? What is the sasquatch anyway? This museum off highway 285 in Bailey attempts to answer just that. At the Sasquatch Outpost, you can see a cast footprint from the big guy himself, learn about the history of the legend, see real artifacts associated with Bigfoot, and more. Who knows? Maybe you’ll take a hike afterward in the nearby Lost Creek Wilderness Area or Kenosha Pass and spot the ‘squatch yourself. (But who would believe you?)

When you’re on a road trip, you’ll almost definitely need to stop and fill up your tank at some point, and in Lamar, there’s one gas station you won’t want to miss. The Petrified Wood Gas Station was built in 1932 using pieces of petrified wood. Petrified wood is ancient wood that has literally fossilized into stone. The pieces used to create the service station in Lamar are estimated to be at least 175 million years old, making it, arguably, the oldest building on the planet. While you used to be able to pump gas at the Petrified Wood Gas Station, it’s no longer a possibility, though taking a drive through Lamar to check out this one-of-a-kind piece of architecture is an absolute must if you’re in Southeast Colorado. 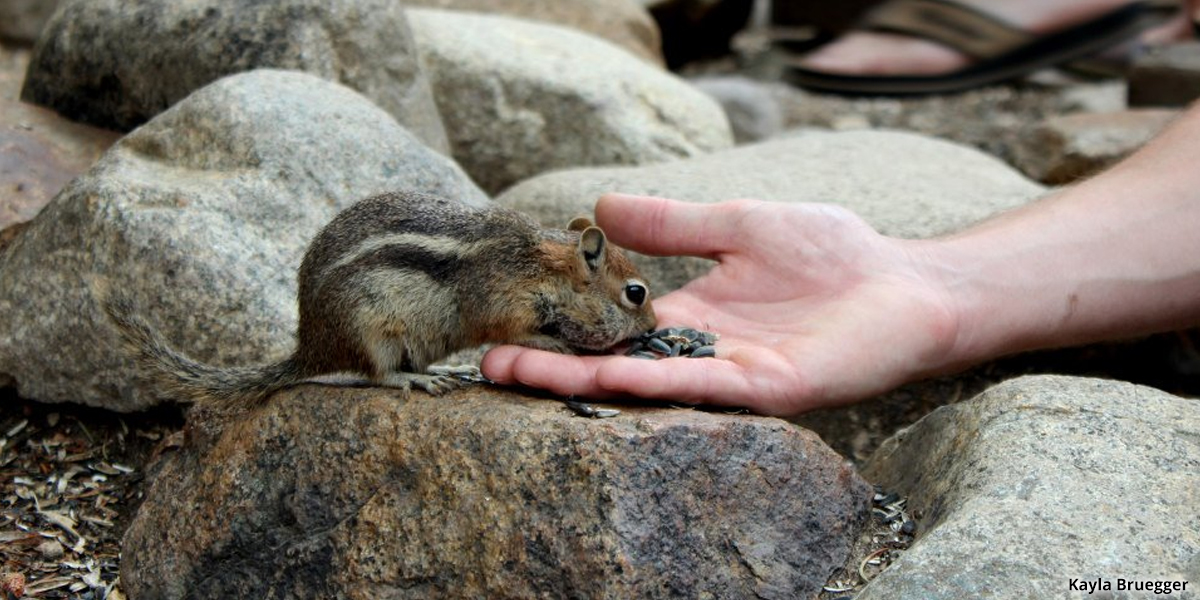 Next time you’re in and around Mount Princeton, take a drive up to St. Elmo’s, one of the most famous ghost towns of Colorado. The old mining town is one of the best-preserved ghost towns in the West, and it’s an incredible sight in and of itself, but what really makes it unique—and kind of like something out of a Disney movie, if we’re being honest—are the chipmunks. The population of wild chipmunks who live in St. Elmo are so domesticated they’ll sometimes run up your arms in search of food. While it’s generally frowned upon to feed wildlife, visitors are encouraged to buy a bag of sunflower seeds outside the abandoned general store for 50 cents a pop and make friends with the social little rodents who roam the town.

The ten attractions on this list are only a fraction of what you’ll find driving through Colorado. From obscure museums, historical sites, outlandish sculptures, UFO watchtowers, and other oddities, our state is full of history and whimsy, so next time you’ve got a spare weekend, hop in the car and take the scenic route. You never know what you might find.