There are over nine hundred unique species of wildlife in Colorado. From mule deer and prairie dogs to cutthroat trout and black bears, the Centennial State has an impressive variety of animals, birds, and wildlife, and due to our unique and varied geography, there are a lot of wildly different habitats throughout the state. During your next adventure in the high country, keep your eyes peeled for some of these fascinating Colorado critters:

Elk tend to stick below the treeline as a general rule, because food and grazing is much more abundant. If you’re looking to spot elk, places like Estes Park and Rocky Mountain National Park are all but a sure bet. But it’s also possible you’ll see them while out and about at higher elevations. During the summer especially, when snow melts and grass grows on the high mountainsides, it’s not uncommon to spot a few of these majestic animals above the timberline.

The Shiras Moose, which is the species of moose found in Colorado, has adapted more than many of its cousins to live in the high-elevation forests and alpine valleys of the Rocky Mountains. Because they are bigger than elk or deer, snow depth doesn’t matter as much to the mighty moose, and they can be found at higher elevations—and in deeper snow—throughout the year. If you’re on the lookout for a moose, stick to dense mountain forests, but if you do spot one of these giants, deceptively-passive looking animals, be sure to keep a safe distance, because they can move surprisingly fast and be very territorial. 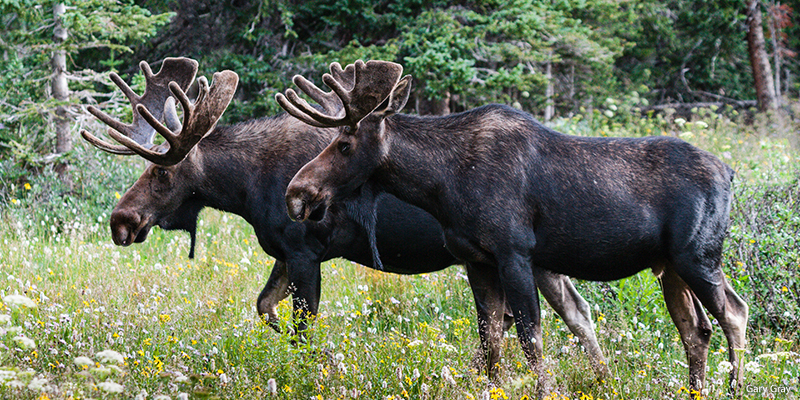 The Rocky Mountain Bighorn Sheep is the state mammal of Colorado. With their huge, curved horns and distinctive brown coats to help them blend in among the rocky mountainsides, these creatures are perhaps best known for their incredible ability to climb steep cliffs and rocks. Unlike other animals like elk or deer, bighorn sheep don’t shed their horns. Instead, they grow throughout the sheep’s life, sometimes up to 50 inches in length and 30 pounds in weight, so if you spot a sheep with a really big set of horns, you’re probably looking at a mature member of the herd. Bighorn sheep can live in the high country year-round thanks to their double-layered coats, though some of them venture to lower elevations during the winter.

There are two types of weasels found in Colorado—the short-tailed weasel and the long-tailed weasel—but both are called ermines in the winter, when their coats change from brown to a brilliant white. (Other members of the weasel family, like martens and ferrets, also can be found in Colorado.) These little guys have black-tipped tails, are incredibly versatile, and can be found in a number of habitats, but they are perhaps most common in dense mountain forests and high alpine areas like Summit County.

These large cousins of the squirrel family look a lot like the groundhogs or woodchucks found in other parts of the country, and their size and chubby bellies are how they keep warm in the high elevations where they like to hang out. Yellow-bellied marmots are named for the golden-hued fur on their undersides, and can often be spotted sunning themselves on a warm rock at higher elevations. It’s not uncommon to stand at the summit of a 14er and look down to see one or two marmots taking a nap on the rocks directly below. They hibernate from September or October until late April or early May, so your best bet for spotting a marmot is during the summer months.

Believe it or not, the shaggy white mountain goats you see all over the Rockies are not actually native to Colorado. They were first brought here in the 1940s as a game animal, but in the time since, they’ve not only survived in the Centennial State, but completely thrived. Mountain goats live in high elevations year-round, in places that are largely inaccessible to humans during the winter, so the best time to spot them are during the warmer months when the snow starts to melt. They shed their thick wooly coats during the summer by scraping it on trees and bushes, so keep an eye out on your next hike to look for evidence of these shaggy guys. If you spot a lot of white hair in the branches of a low bush, chances are, a few mountain goats might be nearby. Mountain goats on Quandary Peak have been known to follow hikers up and down the trail, and the goats on Mount Evans Scenic Byway occasionally hold up traffic, but despite the relatively social nature of these animals, they are still wild animals and should be enjoyed from a safe distance for both your safety and theirs. 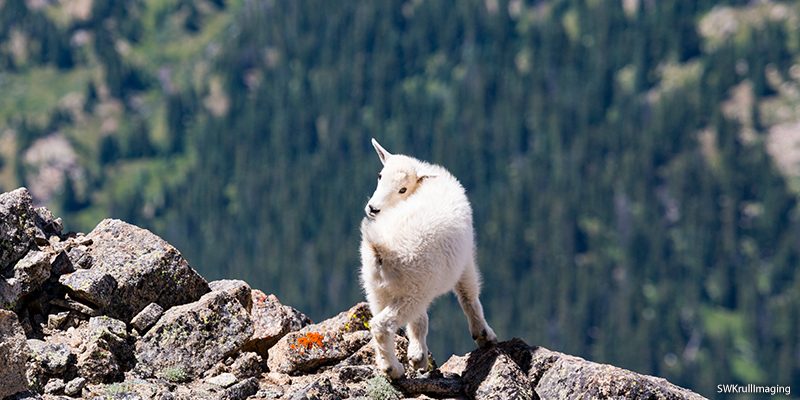 In high-elevation boulder fields, you may spot pika. These furry little rodents have round ears and no tails, and despite their appearances, are much more closely related to rabbits than mice or guinea pigs. Pika spend the summer season collecting grass and other food and drying it on warm, sunny rocks, then storing that food in a cache for the winter. With a keen eye during the warmer months, you’ll be sure to spot a few pika on a foraging mission in the rocks and scree fields of the high country.

These little brown-and-whte spotted birds (completely white during the winter) make their nests in krummholz, the small, twisted, windblown trees often found at steep angles on the mountainsides. The white-tailed ptarmigan, in fact, is the only species of bird that makes its home in or around the high mountain tundras of Colorado year-round. In the winter, these birds bury themselves in snowbanks to keep warm. 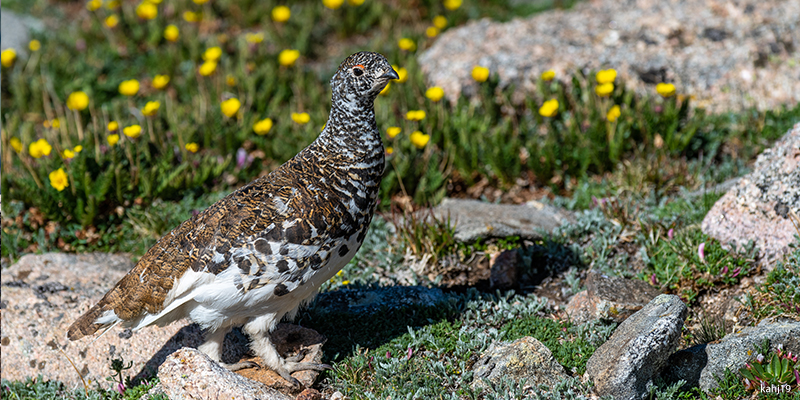 When you’re out on a hike or an adventure, it can be tempting to want to get closer to wildlife for a better look or a better shot for your Instagram. But what you have to remember is that these are all wild animals, and you are the visitor to their home, not the other way around. Animals with a fight or flight instinct may choose to defend their territory, which, especially when it comes to bigger creatures like moose or elk, could put you in serious danger. Moreover, encroaching on a wild animal’s space puts undue stress on wildlife, and may disturb or harm them in the long run. Keeping your distance means you’re allowing the animal to live and act freely, and if you sit quietly and watch without disturbing wildlife, you’ll probably see a lot more activity and natural behavior from the animals.

Another great tip for getting the best wildlife viewing experience is timing. Many animals, like mountain goats, are best spotted early in the morning or later in the evening. Many animals forage or hunt during these times, and like to rest during the warmest parts of the day, so while it’s certainly not unheard of to spot wildlife in the middle of the afternoon, it’s much less likely. Get an early start on your hike for the best chance of spotting moose, elk, bighorn sheep, and mountain goats.