The days of mining gold from the Rockies is, for the most part, behind us, but luckily for you, there’s still a way to get rich in Colorado. Since it was partially legalized in 1990, gambling is only allowed in three towns in Colorado: Central City, Black Hawk, and Cripple Creek, but in each of those towns are some of the most unforgettable gaming experiences you’ll find anywhere. Try your luck in one of Colorado’s casino towns, and see if you can strike gold.

During the mid 19th century, in a small patch of mountainous land less than fifty miles from Denver, a very lucky prospector named John H. Gregory found gold dust while he was panning in Clear Creek, in a gulch now known as Gregory Gulch in his honor. The area became known as the Clear Creek Mining District, and so much gold was mined from the hills and mountains there that it was given the illustrious nickname, “The Richest Square Mile on Earth.” Within just a couple of short months, the population of the area grew to over ten thousand people, all of whom were searching to make their fortune. The towns of Black Hawk and Central City were founded not long after. They were wild places, full of desperate and hopeful miners all looking to get rich, with brothels and saloons galore. Fistfights, knife fights, revolver fights, and other types of violence abounded in a type of free-for-all that wouldn’t look at all out of place in a Western film. So maybe it’s no surprise that today, both of these towns are places where locals and visitors alike go to let loose and do their best to seduce Lady Luck.

At first glance, downtown Central City still looks like it’s stuck in the 19th century, with its brick paved streets and charming old buildings. On Eureka Street, in fact, someone from 100 years ago could time travel to present day and only find one building missing. But the street view aside, it’s what inside those buildings that has truly changed.

Since the 1990s, many of the historic buildings in Central City have been converted to casinos, with a wide array of slot machines and video gambling machines as well as traditional gaming like poker, blackjack, craps, and roulette. Just down the road, the tiny town of Black Hawk has similarly embraced gambling, with casinos that look a bit more modern from the outside but are just as expansive on the inside. 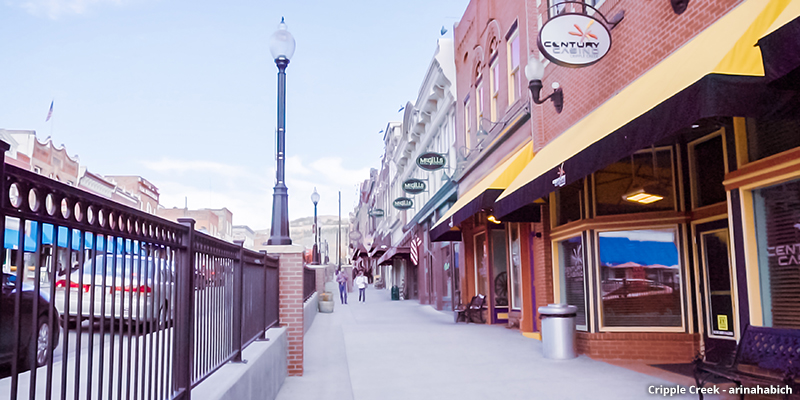 Drive a few hours south from Clear Creek County’s casinos and you’ll find Cripple Creek, another historic gold mining town near Colorado Springs with a similar history. The Wild West flared up like a bright light here, but when the Gold Rush died down, the town was left nearly abandoned until the state gave it the green light to operate casinos. Similar to Central City and Black Hawk, you’ll find all the luxuries of modern gaming combined with the gritty charm and excitement of the Old West, with casinos situated in historic buildings, set in a quaint town with a wild past. Cripple Creek is home to twelve casinos which range in size, theme, and game options on the floor. Everything from a classic game of blackjack to the most innovative new video games can be found in Cripple Creek, and based on numbers from the Department of Revenue, you might just find the slot machines to be a little looser here, and the paybacks a little higher than at other casinos.

There are two American Indian gaming areas in Colorado, and both of them can be found in the southwestern part of the state, in the Four Corners region. In a stark contrast to the historic buildings and converted interiors that make up the casino floors in the old gold mine gambling towns, the Four Corners casinos are huge and modern.

Sky Ute Casino Resort is located in Ignacio, Colorado, and it’s owned by the Southern Ute Tribe. It has nearly fifty thousand square feet of gaming space, with a hotel on site as well as a venue for some big names when it comes to entertainment, especially in sports like MMA and boxing.

Ute Mountain Casino is located Towoac, Colorado, and not only does it have a huge offering of games and entertainment, but also a lot of cool cultural history. Once you’ve had your fill of slots, bingo, and Kino (or maybe if your wallet needs a bit of a break…), you can check out the on site pottery factory or the Ute Mountain Tribal Park, or go for a drive along the Trail of the Ancients Scenic Byway for a gorgeous look at the surrounding area.