Colorado is home to 42 state parks, which bring just as much diversity and natural beauty to the table as their more illustrious national counterparts. Plus, many of them are much more easily accessible depending on where you live. From urban parks with reservoirs and off-leash dog areas to alpine parks full of lakes and snow capped peaks, you’ve got plenty of choices for your next hiking, camping, biking, or fishing trip, and the following parks are just a few of your many options. 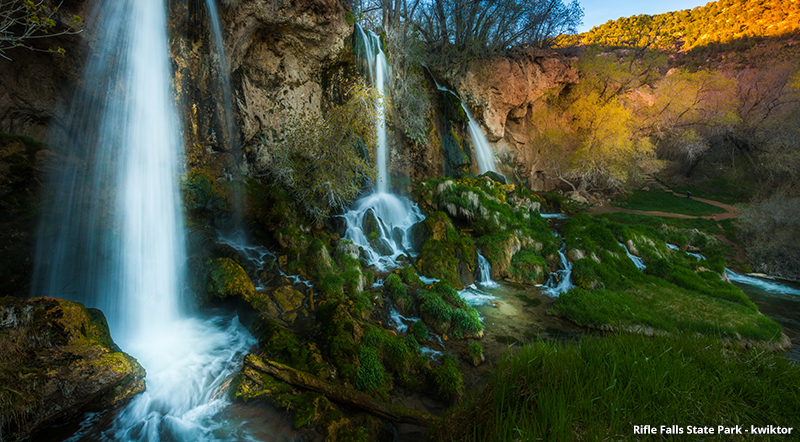 At the center of Rifle State Park, located northwest Colorado, is the 70 foot tall waterfall for which it is named. The falls split into three distinct streams as they travel over the lush green-topped limestone formation, and there are some really cool limestone caves under the falls that you can explore if you’re feeling particularly adventurous.

State Forest State Park is located in northern Colorado, and its amazing grounds are chock full of scenic forests, dramatic peaks and rock formations, and pretty lakes that are a fishing enthusiast’s dream. In State Forest State park, you’ll find campsites, hiking trails, plenty of wildlife, and sunsets that will blow your mind. 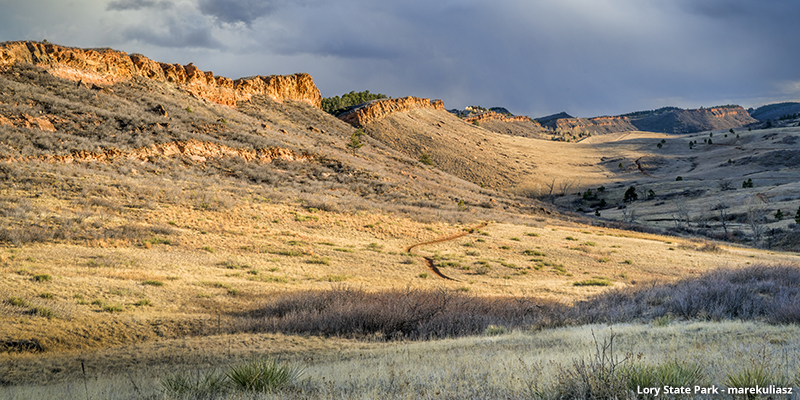 Lory State Park, located in Larimer County just west of Fort Collins, boasts access to Horsetooth Reservoir, and all the boating, swimming, kayaking and more that comes with it. Lory State Park also has nearly 30 miles of trails with gentle grades and easy on the eyes scenery. At Lory, you can hike, camp ride horses, swim, or go mountain biking, and you’ll never once feel like you’re as close as you are to civilization.

Mueller State Park boasts 55 miles in its trail system, as well as over 130 campsites, a couple of cabins for rent, and even a few campsites with horse stalls for those traveling with their big four legged friends. Located near Divide, Mueller State Park offers views of mountains, meadows, and forests. 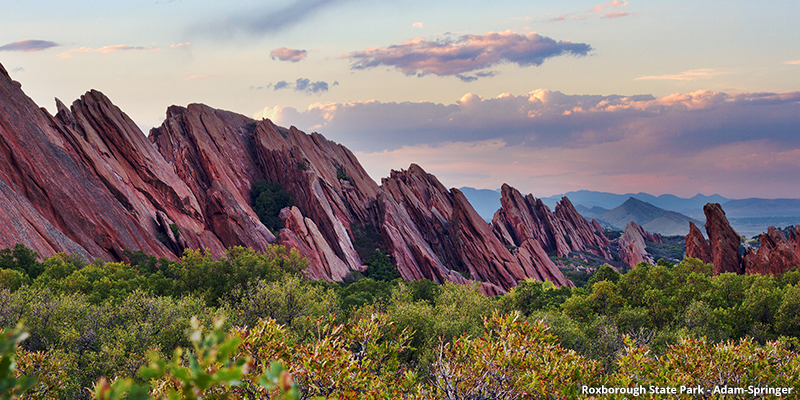 Just 20 miles south of Denver is Roxborough State Park, which often doesn’t get enough credit for its amazingly beautiful red rock formations. The dramatic red sandstone looks gorgeous against the backdrop of the foothills. There are no dogs, horses, camping, or mountain bikes allowed in Roxborough State Park, but there are plenty of hiking trails and the lack of these things mean that it’s not at all uncommon to spot some wildlife.

In western Colorado, just 15 miles from Ouray, is Ridgway State Park, which has a gorgeous reservoir, stunning views of the surrounding mountains, and lots of campsites for tents and RVs, as well as some yurts available for rent. 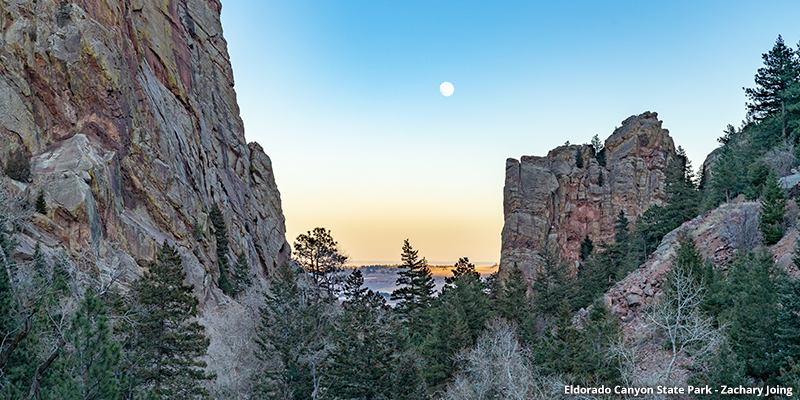 With a creek that is great for a picnic or fly fishing, sandstone canyon walls that are popular with rock climbers, and scenic trail systems for hikers and mountain bikers, Eldorado Canyon State Park, or “Eldo” as it is often referred to, is a popular destination for Boulder residents looking to escape the hustle and bustle of urban life.

Along the very southernmost border of Colorado, Navajo State Park is located at the north end of Navajo Lake, which extends down into New Mexico. During the warmer months, sailboats dot the waters of Navajo Lake, and fishing enthusiasts try their luck year round at the massive lake’s stock of trout, northern pike, large and smallmouth bass, crappie, bluegill, and catfish.

Catch some amazing views of the Elk Mountains while paddleboarding at Paonia State Park, which is centered around the beautiful paonia Reservoir. But there’s plenty more to do at the park than just the lake—during the summer, the trails are simply packed with wildflowers, and if you’re quiet and respectful, you’ll probably have the opportunity to get a glimpse of some Colorado wildlife.

This state run recreation area is located in Salida, and it’s one of the best places in the world for whitewater rafting and whitewater kayaking. The Arkansas River is also internationally known for its brown and rainbow trout, and the fishing opportunities that it affords. Also in the AHRA are trails, plenty of rocks for climbing, campsites, and more, so in a nutshell, it’s an outdoor enthusiast’s paradise. Much like Colorado itself.

Mountain Housing and Job Options in Colorado's Small TownsOnce you conclude that living in a Colorado resort town is not going to fit within your budget. Don't give up, now it's time to look at the other mountain towns. Finding the right mountain...
Read More