Colorado Wildlife and Where to Find Them

Who needs a zoo when we have the great outdoors at our fingertips? Colorado is home to hundreds of species of wildlife, from the tiny chirping pika in high elevation scree fields to mountain lions and other big predator species. 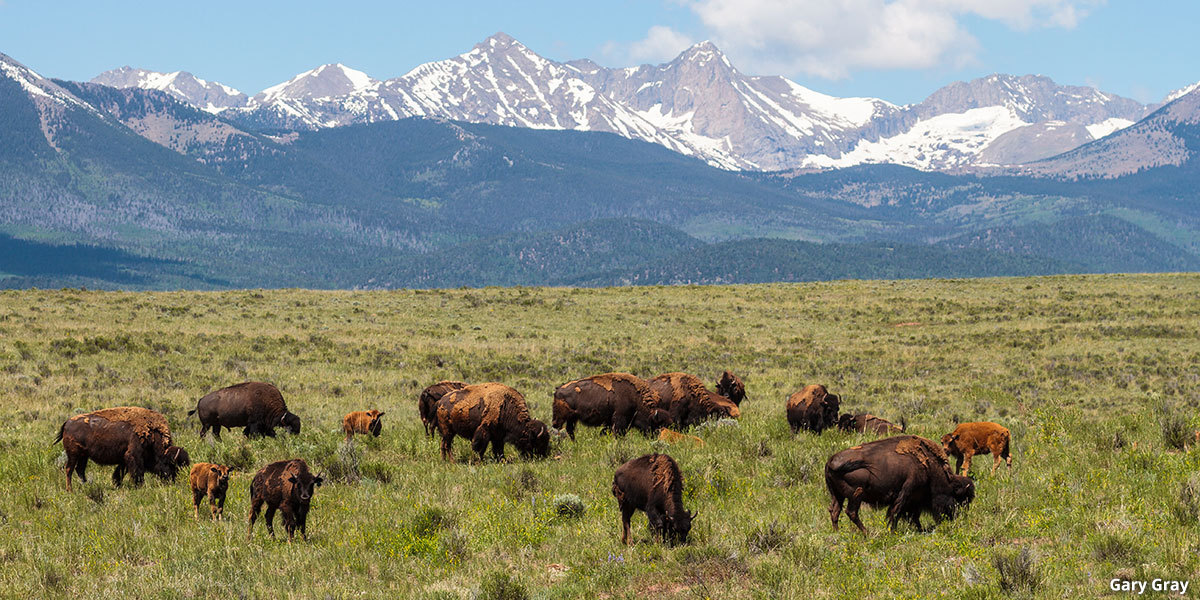 Bison are a classic symbol of the American West, and there are plenty of these majestic giants to be found throughout Colorado. For a sure sighting, check out Rocky Mountain Arsenal National Wildlife Refuge near Denver, the Buffalo Herd Nature Preserve right off I-70 (exit 254) near Golden, and Zapata Ranch near Mosca.

Most sheep aren’t indigenous to North America, but Colorado’s own Rocky Mountain Bighorn Sheep is one of the few species that is native. These brown-bodies mammals are amazing climbers who can ascend cliffsides and slopes that are nearly vertical with apparent ease, and they are known for the males’ distinctive thick, curved horns. You’ll have your best bet of spotting bighorn sheep in the mountains and cliffs throughout Colorado. If you keep your eyes peeled while driving through the I-70 corridor, you might see them near Guanella Pass (you can also pull off at a scenic overlook for a closer view), and if you visit Royal Gorge in Canon City, you might just spot a few blending in to the rocks and steep walls of the canyon along the Arkansas River.

We know, this is an extremely vague category. There are more than five hundred species of birds that call Colorado home, some of which live here year-round and some of which migrate to and from Colorado depending on the season. Birdwatching is a fun hobby and a great way to acquaint yourself with nature, so if you’re interested in learning more, start by checking out our guide to some of the birds of Colorado. 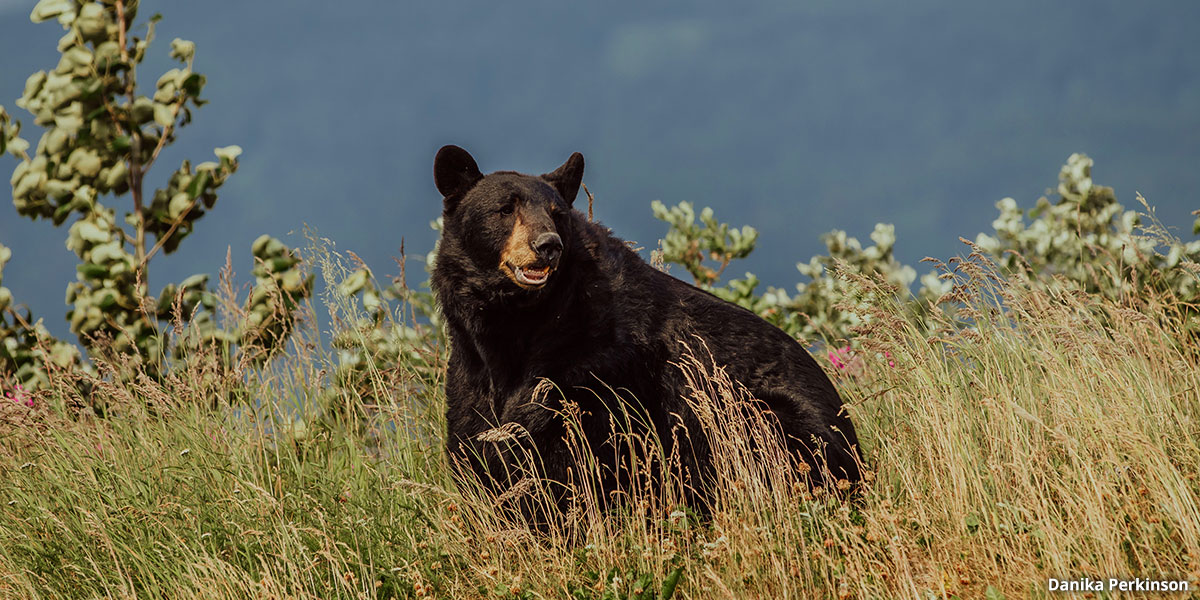 Black bears are quick on the ground and excellent climbers, and despite the name, they come in many colors—black, honey-blonde, or even a cinnamon brown color. The highest concentration of black bears in Colorado live east of the San Luis Valley, but they can be found throughout the state, including in most of the national parks. Black bears hibernate from October to May, and when they’re out of hibernation, they are not only hungry, but ready to make full use of their excellent sense of smell. If you’re camping or backpacking in bear country, always make sure to store any food or fragrant supplies appropriately. Black bears can smell food from miles away, and believe us, these wonders of nature are best seen from a safe distance!

There are two species of eagle that live in Colorado—the bald eagle and the golden eagle. Bald eagles live year-round in Colorado, and can most often be found around bodies of water where they can go fishing. Keep an eye out for larger lakes or rivers surrounded by forests that are great for their nests.

Golden eagles, on the other hand, prefer to hunt for mammals. They like to build their nests in cliffs and canyons where they have a good view of their surroundings, and can be found across Colorado. 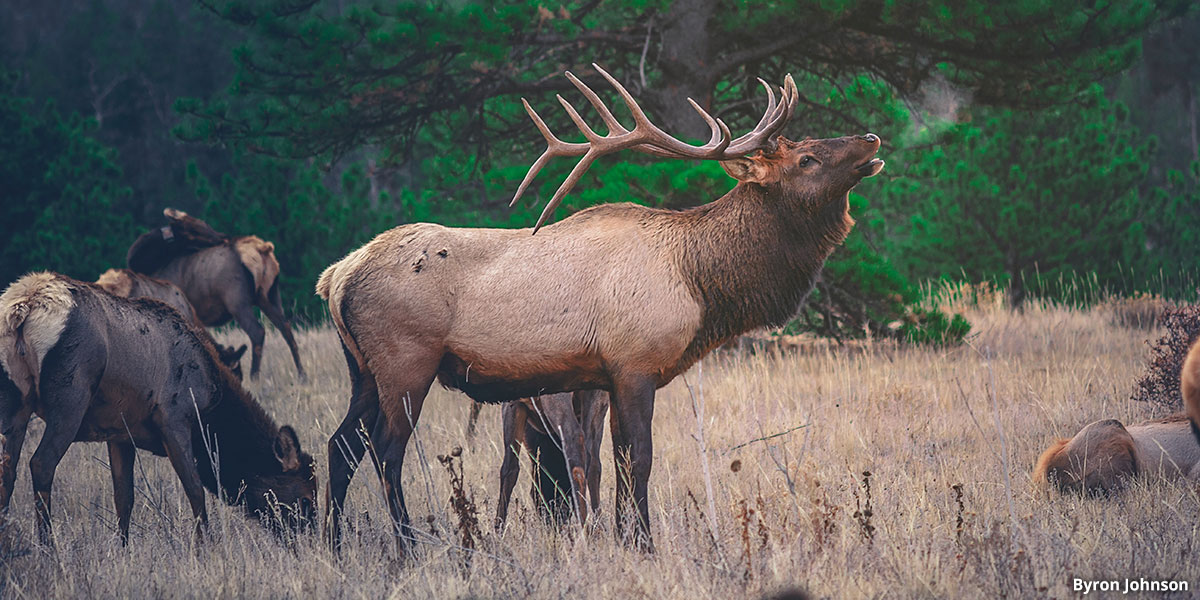 Elk can be found throughout Colorado, generally at elevations of 7,000 feet or higher. They are abundant in Rocky Mountain National Park, and can often be found chilling on the golf course in downtown Estes Park. Grand County is another great place to spot Elk. With their massive antlers and a strong protective sense for their herds and young, elk can be extremely dangerous, so as with most wildlife, it’s important to keep a safe distance.

Black-footed ferrets are the only species of ferret in the world that is native to our continent, and more than once, they were thought to be completely extinct. These little predators were reintroduced to Colorado during the 1980s and are once again beginning to thrive in the Centennial State. They can be identified by their black feet and the black patches over their eyes, though they’re often confused with weasels, ermine, and martens when caught at a glance. There are several reintroduction sites for this species in Colorado, but if you’re looking for a sure sighting, check out Rocky Mountain Arsenal National Wildlife Refuge, which has a population within the park as well as two “retired” ferrets who live in the Visitor Center’s ferret house.

Yellow-bellied marmots look a bit like groundhogs or tail-less beavers, but they’re actually part of the squirrel family. These chunky rodents can get up to two feet in size and are most often found at higher elevations. They hibernate from September until May, and actually spend about half their lives in hibernation. Marmots live with their colonies in huge mazes they dig under meadows and scree fields, and it’s pretty common to find them sunning themselves on rocks at high altitude. 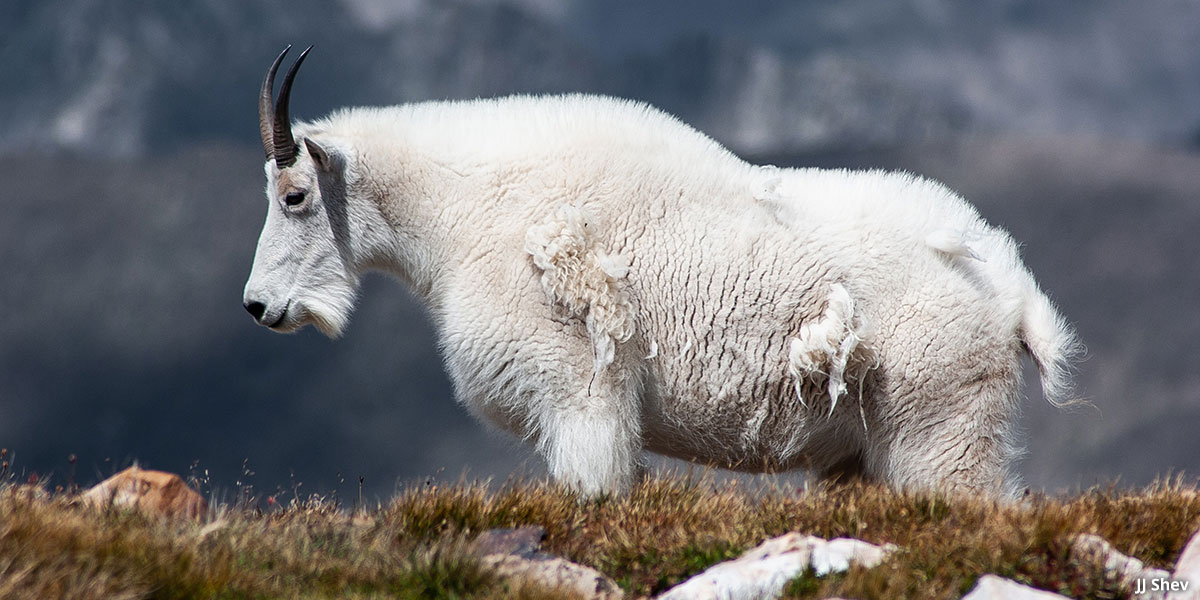 Shaggy white-haired mountain goats are a symbol of Colorado at this point, but did you know they’re not even indigenous to the area? They were brought in during the late 1940s as game, and have since grown to thrive in Colorado’s high country. If you’re looking to spot some, head UP. Mountain goats are abundant at high elevations, and can often be found at Mount Evans, Grays and Torreys Peaks, and Quandary Peak. Like many forms of wildlife, they are most active at dawn, and like to sleep during midday.

Unlike many of the animals on this list, mountain lions are one we generally hope we never spot. These beautiful but dangerous predators are masters at blending in with the scenery around them, and can reach up to eight feet in length. They’re often found in the foothills, in areas full of oak brush, juniper, and ponderosa pines, which provide excellent cover, or wherever deer are plentiful. They also are abundant in Colorado, where there is an estimated population of 3,000-7,000 mountain lions, though most people, even residents, will never spot them. Mountain lions are scary, and attacks do happen occasionally, but they will generally avoid humans whenever possible, unless they are feeling threatened. 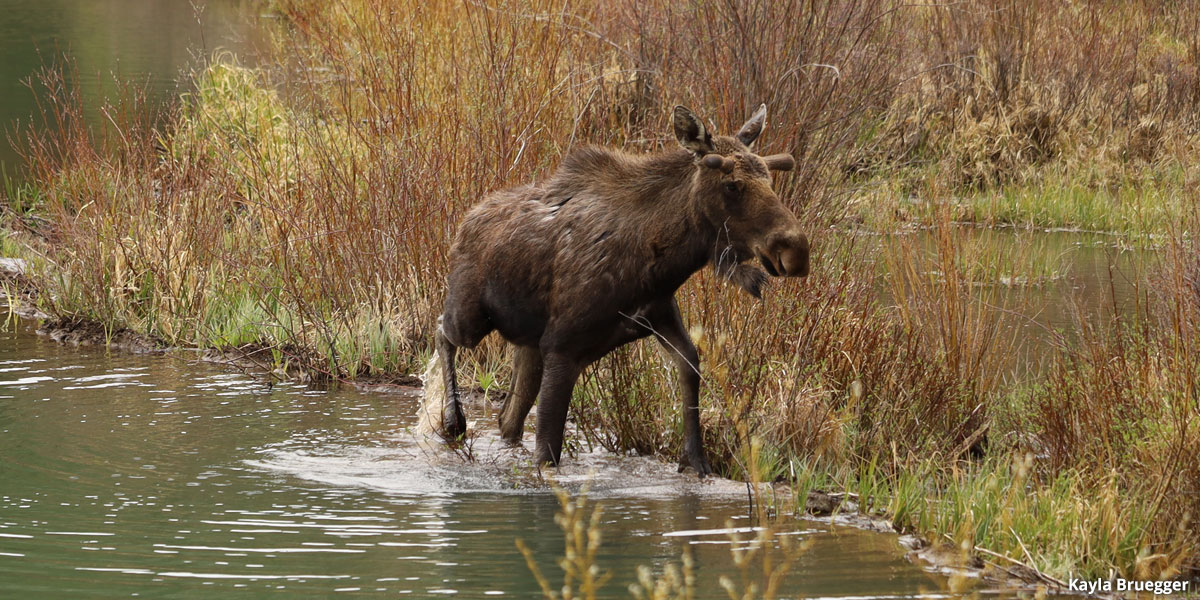 Moose might look docile, but they are huge and can be incredibly dangerous if they feel threatened. They’re the largest members of the deer family, and the specific species of moose found in Colorado is known to be well-adapted to high altitude in a way other species are not. State Forest State Park, near Walden CO, calls itself the “Moose Capital of Colorado,” so if you’re looking to check these guys off your list, head there for a sighting.

This busy architect is a keystone species, and it’s native to Colorado. You’ll find beavers in and around bodies of water—look for their dams, lodges, and evidence of their tree-felling on nearby shrubs and trees.

We know this is going to shock you, but if you’re looking for prairie dogs… head to the prairie. Okay, that’s a little reductive. There are three species of prairie dog in Colorado. There’s the black-tailed prairie dog, which is most commonly found on the Eastern Plains and in the Front Range (it’s not uncommon to find them in and around the city of Denver as well), the white-tailed prairie dog which resides in the northwest region of the state, and the Gunnison prairie dog, which hangs out in the southwest region of Colorado. Prairie dogs might seem like pets, but many are surprised to learn they, like beavers and wolves, are a keystone species, and the entire ecosystem depends on them.

There are dozens of species of snakes that live in Colorado, but we know you’re here to hear about the so-called scary ones. The prairie rattlesnake, the Western rattlesnake, and the Massasauga rattlesnake are the three varieties of venomous snake that live in our state, and they’re another one of those types of wildlife we hope we don’t see. And the thing is, the feeling’s completely mutual. Rattlesnakes would much rather hide and avoid you than strike, so if you hear that telltale rattle, step back. They generally avoid high-trafficked trails, again because they don’t actually want to come in contact with humans, and tend to hide beneath rocks and fallen logs, or in tall grass. It’s rare to find rattlesnakes above 9,000 feet elevation, so keep that in mind when hiking in high-country or down in the plains. 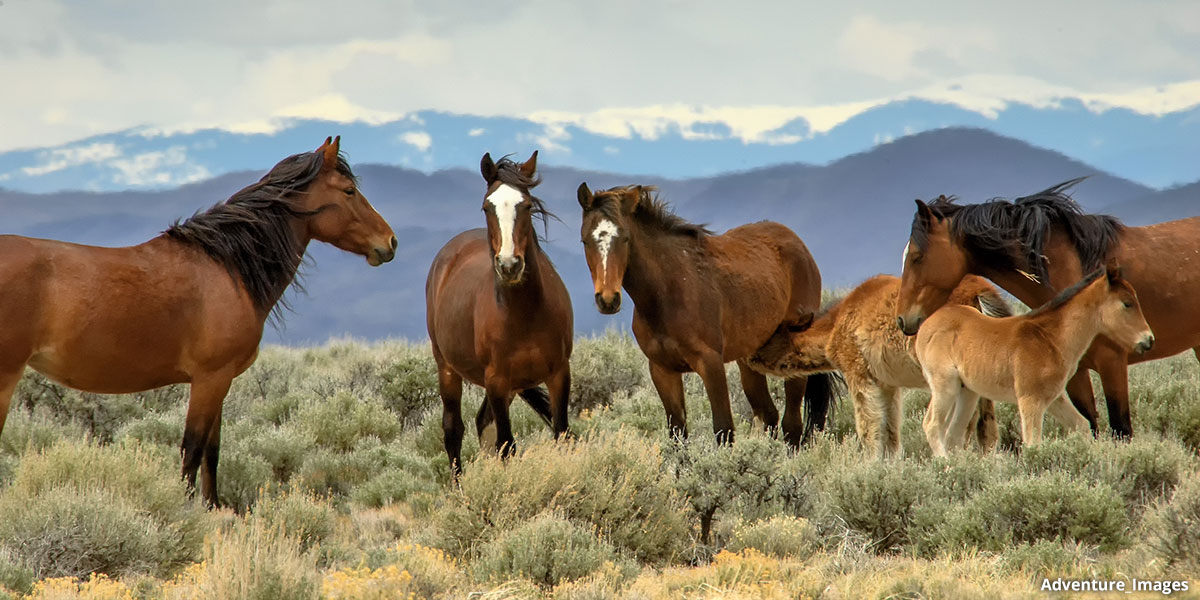 Wild horses aren’t indigenous to the US, but these days, you can find a few herds around Colorado. Check out Sand Wash Basin, about 50 miles west of Craig, Colorado, where hundreds of horses roam over 166,000 acres of land. You’ll be able to see them (from a safe distance) and even camp near them, though it’s imperative you give these wild creatures their space. Another great place to check out wild horses is Little Book Cliffs Wild Horse Area, near Grand Junction.

There are a few members of the weasel family in Colorado, including the black-footed ferret, listed above. The long-tailed weasel and short tailed weasel can both be found at high elevations throughout Colorado, though the short-tailed weasel prefers forests and meadows while the long-tailed weasel is a bit more adaptive to other Colorado habitats. These little predators are pretty adorable, and they change color depending on the season. Also called ermines or stoats, they have a brown body with a white underbelly during the summer, which changes to a brilliant white coat in the winter.

It’s exciting to see animals in the wild, but whether you spot a bear or a prairie dog, it’s important to always keep your distance. Remember, you’re in their home, and socializing wild animals only harms them. Animals who become too used to humans can become aggressive and sometimes have to be killed for everyone’s safety.

Don’t ever feed or touch wild animals, and do some research so you know how to react if you encounter a predator. Wildlife is an incredible part of Colorado, but it’s important to remember that it is still WILD. Do your part to keep it that way so we can continue to share our beautiful state with these amazing creatures.