There are 26 scenic byways in Colorado, 11 of which have been nationally designated as “America’s Byways”—more than any other state in the country. So next time you’re driving through our fine state, keep an eye out for the distinctive blue and white star-shaped columbine—Colorado’s state flower—which is proudly emblazoned on the road signs for these gorgeous roads, which offer everything from stunning mountain vistas with death-defying twists and drops to lazily twisting pioneer trails through abandoned ghost towns and historically significant sites.

Alpine Loop, located in the San Juan Mountains of Southwest Colorado, takes drivers 65 miles through two mountain passes—Engineer Pass and Cinnamon Pass—as well as towns like Ouray and Silverton. The byway runs through some abandoned mining camps and towns, including Animas Forks, a notable ghost town. Typically, Alpine Loop opens each year around Memorial Day and closes early in the fall, but during its short but sweet season, it’s great for seeing loads of wildflowers. 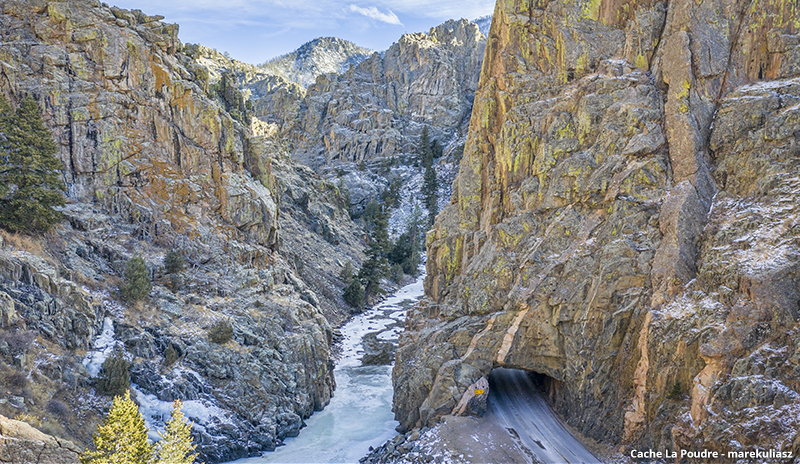 This historic road runs for 101 miles between Walden and Fort Collins, and is also known as Colorado Highway 14. It follows the Cache la Poudre River through the Rockies, culminating at Cameron Pass at over ten thousand feet. Cache La Poudre Scenic Byway is open year-round.

Collegiate Peaks Scenic Byway connects Granite, CO, with Salida, and stretches 57 miles north and south through the mountains. It is the newest of Colorado’s officially designated scenic byways, which was named in 2005. As you might guess by the name, this byway runs through the Collegiate Peaks range, featuring 14ers like Mt. Oxford, Mt. Harvard, and Mt. Princeton, but the gorgeous nature aside, it also passes through some areas of historical significance, like the Old Nathrop Schoolhouse or the Midland Tunnels.

Did you know that the waters of the Colorado River carved the Grand Canyon into what it is today? These mighty waters originate in Grand Lake, on the western edge of Rocky Mountain National Park, and follows the Colorado River 80 miles through mountains, canyons, lakes, and more to the Utah border.

Dinosaur Diamond Scenic Byway comprises both Colorado and Utah, and between the two states it forms a 512-mile diamond-shaped loop that passes through Moab, Grand Junction, and more. Its name comes from the excavation sites along the byway, including Dinosaur National Monument.

Frontier Pathways is 103 miles long, and shaped like a wishbone. From end to end, it leads from Pueblo to Westcliffe to Colorado City, and it is home to a wide and storied history of Spanish conquistadors, early American pioneers and fur trappers, and the Ute people.

The Goldbelt’s name comes from its history as the center of Colorado’s Gold Rush. Located in southern Colorado, the Goldbelt Tour Scenic Byway connects several old mining towns and passes by the majestic Pike’s Peak, the impressive Royal Gorge, and Phantom Canyon.

Grand Mesa, on the Western Slope, is the largest flat-topped mountain in the world, and if that sounds cool to you, just wait until you take a drive on Grand Mesa Scenic and Historic Byway. This drive will take you through gorgeous vistas and old-growth forests, past literally hundreds of beautiful lakes. 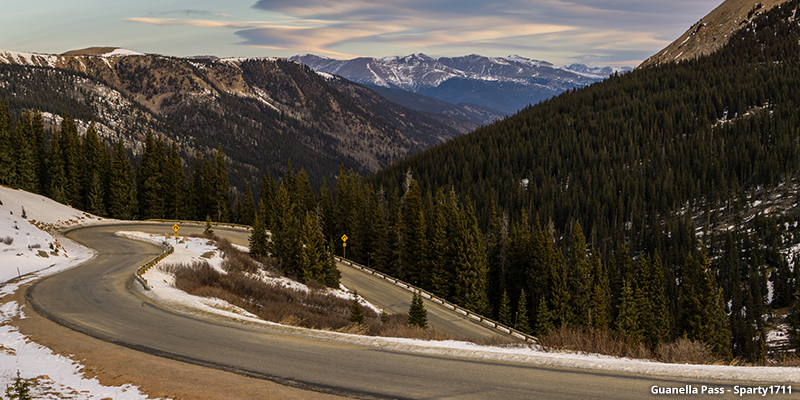 The charming old silver mining town of Georgetown is located right off I-70, so it’s easy to find. From there, follow Guanella Pass Scenic Byway for 22 miles to Grant, CO. Along the way you’ll follow Clear Creek and the South Platte River, and travel up to 11,669 feet to catch incredible views of Mount Bierstadt, one of Colorado’s 14ers.

The Lariat Loop in the Front Range was one of the first roads that the city of Denver built to help its citizens enjoy the incredible majesty of the Rocky Mountains. This national scenic byway takes in the towns of Golden, Morrison, and Evergreen, with landmarks like Red Rocks Amphitheatre, Lookout Mountain and Buffalo Bill’s gravesite, and Dinosaur Ridge along the way.

Explore the San Luis Valley along this 129-mile drive in southern Colorado. From Alamosa to Cumbres Pass and into New Mexico, Los Caminos Antiguos, which translates to “the ancient roads,” passes by Our Lady of Guadalupe Church, the oldest church in Colorado, as well as Fort Garland, Zapata Falls, the Sangre de Cristo mountain range, and Great Sand Dunes National Park.

At 14,262 feet elevation at its summit, Mount Evans sits comfortably on the list of Colorado’s 14ers, and the scenic byway that leads to the very top of this peak is the highest paved road in the entire North American continent. While at times the hairpin turns and switchbacks edged by steep gorges can prove terrifying and anxiety-inducing, the view from the top of this amazing mountain is well worth the drive. Mount Evans Scenic Byway generally opens for the season each year around Memorial Day, depending on the weather and amount of snowpack.

Pawnee Pioneer Trail travels in the very footsteps of the people who came before us. This scenic byway follows the path that Native Americans and later white pioneers took as they traveled 128 miles east and west through what we now know as Ault, Sterling, and Fort Morgan.

The Peak to Peak Highway is located in Colorado’s Front Range region, and connects Estes Park to Blackhawk, with stops along the way in Allenspark, Ward, and Nederland. Since it was first designated in 1918, it has been showing drivers some great views of the Continental Divide, including Wind River Pass, Indian Peaks Wilderness Area, and Brainard Lake. 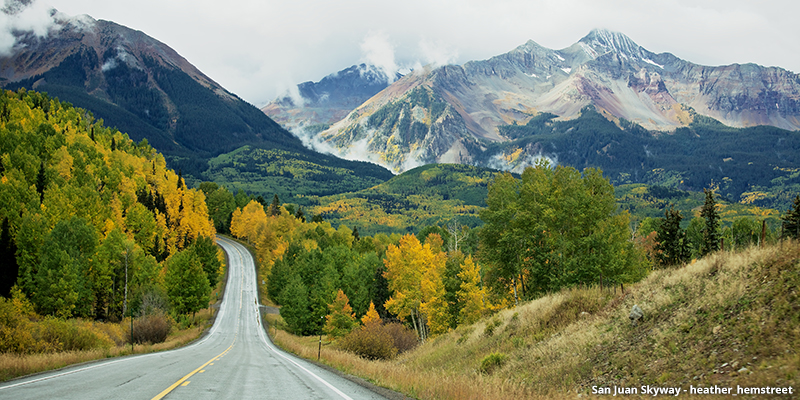 This 233-mile loop will take you through towns like Ouray, Silverton, Durango, Dolores, and Telluride, with amazing views of the San Juan Mountains, abandoned mining towns, and gorgeous state parks.

When pioneers traveled west in their covered wagons, many of them followed the Santa Fe Trail from the Kansas border near Holly, CO to the New Mexico border at Raton Pass. Later, it became a well-traveled road in the Wild West. Today while driving on the Santa Fe Trail Scenic Byway, you’ll find the St. James Hotel, a saloon founded in 1873 where famous outlaws and cowboys like Buffalo Bill Cody and Jesse James once stayed.

South Fork meets Blue Mesa Reservoir, near Gunnison, via the Silver Thread Scenic Byway. Take this 120 mile drive through sections of the Rockies that feel delightfully and eerily isolated and empty of human impact, except for the historic mining towns and abandoned ghost towns of the silver rush of the mid-19th century.

The South Platte River Trail is the shortest scenic byway in Colorado, at only 19 miles long, but this little loop packs a big punch. Located in northeast Colorado, it follows one of the trails that pioneers took during Westward expansion on the Overland Trail, and along it is Julesburg, the only Pony Express station in Colorado.

Pass by Colorado’s two tallest mountains—Mount Elbert and Mount Massive—on this drive, which forks to connect the mountain towns of Aspen, Leadville, Copper Mountain, and Minturn. Top of the Rockies crosses the Continental Divide three times along its 82 miles, and provides you with some of the most dramatic and breathtaking possible views of the Rockies.

This interstate scenic byway follows the Colorado-New Mexico border for 125 miles, and since it’s the newest scenic byway in the state, its designation and signage is still a work in progress. Here, you’ll take in ancient Native American lands, incredible natural views, and the site of the Denver and Rio Grande Railroad, which was built in the 19th century as the first and largest narrow gauge railroad system in the country.

Take the Trail of the Ancients from Hovenweep National Monument at the Utah-Colorado border down to Four Corners, where Colorado, Utah, New Mexico, and Arizona all meet. Stop off along the way to see ancient petroglyphs and cave dwellings that date back centuries. 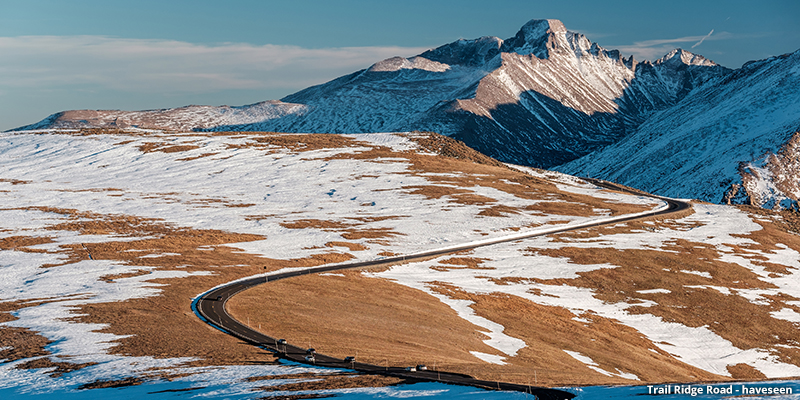 Trail Ridge Road, located in Rocky Mountain National Park, is the highest paved through-road in North America. It connects Estes Park to Grand Lake, and along its 48 miles, it twists and turns and makes its way above the treeline for a high point at over 12,100 feet and some breathtaking views of the Front Range.

Located in Southwest Colorado between Whitewater and Placerville, Unaweep Tabeguache is one of the wildest and most backwater scenic byways in the state. This 133 mile road takes you on a scenic and unforgettable journey through red sandstone formations, dramatic canyons, and towering buttes.

This scenic byway starts in Carbondale and loops south through Hotchkiss, Cimarron, Gunnison, Crested Butte, and back up to Carbondale again. The drive will take you through some of the most gorgeous river valleys in the Rockies, and during the summer they will be simply packed with wildflowers.

Wherever the road may take you in Colorado, keep an eye out for these gorgeous scenic byways, and if you’ve got a little extra time to kill on your drive, don’t be afraid to take the scenic route, because in Colorado, it’s going to be worth it.

Note: Scenic Byways marked with an asterisk (*) designate each of the 11 national scenic byways in Colorado.

Mountain Housing and Job Options in Colorado's Small TownsOnce you conclude that living in a Colorado resort town is not going to fit within your budget. Don't give up, now it's time to look at the other mountain towns. Finding the right mountain...
Read More