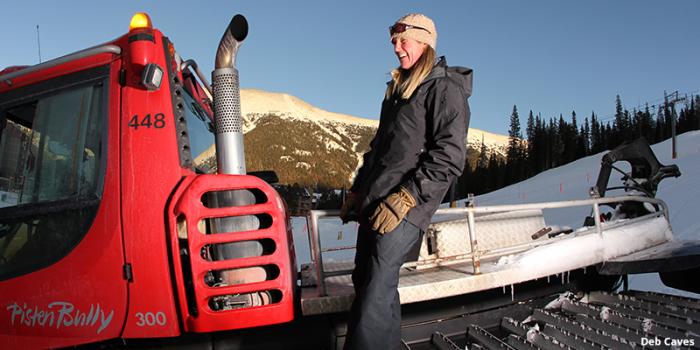 Each year, thousands of boarders careen through the 22-foot Olympic-caliber Main Vein Superpipe at Copper Mountain, and plenty of the world’s elite riders have gone huge off its walls. But what does it really take to build such a gorgeous, gargantuan testament to shredding? Deb Caves perfects the walls with her Piston Bully.

Only one person at Copper knows the full story. She’s stocked with decades of practice, an obsession with perfection and long nights of solitude.

For 10 years, Deb Caves has been the main pipe cutter at Copper, earning a name for herself in the industry and having a great time doing it.

Caves started grooming snow at Copper Mountain in 1995 and, drawn by the challenge, transitioned to cutting the halfpipe about a decade later. As evolving snowboarding competitions called for bigger and more badass pipes, she became one of the industry’s elite pipe cutters.

To Caves and other pros, a halfpipe is a “product,” and she is dedicated to perfecting hers. Night after night, she climbs into her massive snowcat and grooms the curving, vertical rising walls of snow, ensuring they are safe and thrill-ready for the next day’s boarders.

“To me, perfection is hard to achieve because there are so many different aspects to a pipe,” she says.

As for the working environment, Caves finds it pretty peaceful out there on the mountain in the dead of a winter night. She’s generally alone save for the occasional fox or coyote padding down the pipe.

For Caves, every shift is exciting, and she loves being out there in the dark, alone in her snowcat, watching snowflakes swirl as the tall walls loom around her.

“Just being out there is an experience in itself,” Deb says.

It’s an experience, she admits, that not many women have had. Groomers in general are overwhelmingly male, and pipe cutters are a smaller, specialized subset. But Caves has always been in the construction industry, and this job is a natural fit for her. She’s proud of her work and appreciates the community of mutual respect among all the grooming staff here.

Mostly, she’s thrilled to have the pleasure of cutting the pipe. “We’re so lucky to have those kinds of jobs in the mountains here,” she says.