Fremont county’s strong western heritage is shown by the county’s ranching and love for cattle and horses. Cattle arrived in the late 1860s when the vast Texas herds were moved north by cattle drovers such as Charles Goodnight and Oliver Loving. Cattle were sent to feed miners in Leadville and later Cripple Creek. Early ranchers found that much of Fremont County was good for raising beef, with plenty of good grass and ample water. The draws and valleys protected the herds from predators and made rustling harder because of the work and time needed to get cows out of the canyons.

At round-up, the cows and calves have to be driven out of those same draws, and canyons and cowboys need persistence and superb skills in riding a good horse, roping and branding. Since 1872 these skills have been displayed at the annual Royal Gorge Rodeo that coincides with the Music & Blossom Festival and Parade on the first weekend in May. Colorado’s oldest continuously held rodeo, this event is sanctioned by the Colorado Professional Rodeo Association and includes bull and bronc riding, calf roping, bulldogging, and barrel racing. Today, active cattlemen’s and cattlewomen’s associations keep a Brand Board with brands of area ranches at Fifth Street and Main in Cañon City.

Fremont county epitomizes the romance of the early western lifestyle that has been etched into our memories. Even more than that, Fremont county was a fundament location of many of the early western movies that included notable stars like John Wayne, Claire Trevor, Slim Pickins, Jane Fonda, Goldie Hawn, John Belushi, and others. This area was a cumulative clash between the gold rush days, cattle ranching, and rustling, a crossroads where travelers moved from east to west and north to south. All of the small mining and ranching towns were in difficult remote areas beckoning outlaws and lawlessness. Essentially, a perfect real-life setting, of the wild-west stories that many of the early western motion pictures are derived from. 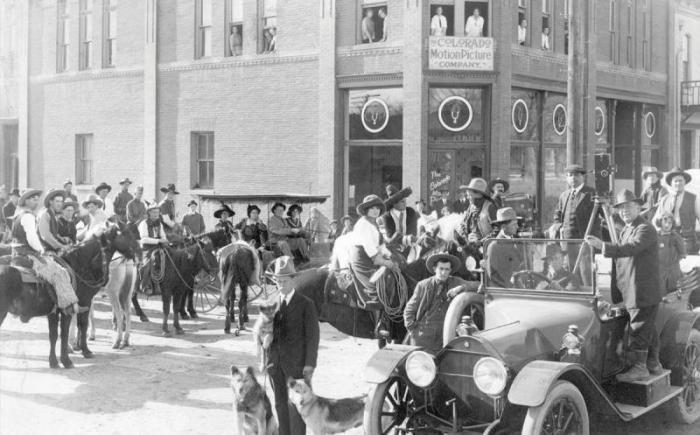 Western heritage is also evident at the Fremont County Fair in late July/early August; a showcase for 4-H kids and for adults whose home-fashioned crafts and foods have become the stuff of legends. Originally a livestock show held on Main Street, the fair features a livestock auction on the last Sunday, when businesses show support for young 4-Hers. The free event is held at the Fremont County Fair Grounds at the top of Ninth Street in Cañon City and at Pathfinder Park near Florence.

Tom Mix was a budding star when he appeared in the first of many silent movies filmed in the Cañon City area. After winning national riding and roping contests at Prescott, Arizona, in 1909 and Cañon City in 1910, Mix appeared in various rodeos and Wild West shows, then joined the Selig Polyscope Company of Chicago and returned to Cañon City in 1911 to make films.

In addition to entertaining audiences on film, after-hours activities of Mix and his companions entertained local residents. From shooting lemons off glasses in a “Hell’s Half-Acre” saloon to escaping his angry, pistol-toting wife by hiding in a rolled-up awning at the downtown Cañon City Elks Club (until the doorman unrolled it at dawn), Mix had plenty of adventures in the area. Filming could be hazardous, too, with Mix and another actor nearly drowning in a stunt with their horses in the Arkansas River at Grape Creek, not far from the place where actress Grace McCue and her cameraman later perished when she slipped off her horse and was swept downstream while filming “Across the Border” in 1914.

Mix spent many nights in the Prospect Heights Jail after a night of carousing in that town, which boasted eight bars within a two-block area immediately adjacent to Cañon City. The bars were open 24 hours a day to accommodate the round-the-clock shifts of area coal mines. The jail, still standing at 1315 S. Fourth Street in southwest Cañon City, is now owned by the Fremont County Historical Society and can be toured with advance arrangements.

When Selig Polyscope left Cañon City for California, the Colorado Motion Picture Company, with backing from Denver investors, took over filming in 1913 and made over a dozen films here. The lawsuit resulting from Grace McCue’s drowning forced it into bankruptcy, but that was not the end of Fremont County’s role in the movies.

The Cañon City Film Committee of the Chamber of Commerce

The Cañon City Film Committee of the Chamber of Commerce, carrying on the earlier tradition of the Businessmen’s Association, worked to attract filming. Established in 1950 at the suggestion of Cañon City resident Karol Smith, a photographer who had worked as a production coordinator on the 1948 film “Cañon City,” the organized effort resulted in 14 films being shot here over the next three decades.

Buckskin Joe was the location for many films. The movie set and tourist attraction near the entrance to the Royal Gorge Park was created by Karol Smith and others in 1957 using buildings moved from area ranches and old mining towns, including the original town of Buckskin Joe near Alma, Colorado. The property was purchased by billionaire Bill Koch in 2010 and moved to his Gunnison ranch.

Working ranches provide a backdrop for many films, as well as providing horses, cattle, wranglers, and stunt doubles. The Draper Ranch, straddling the Fremont/ Custer County line along CO 67 south of Florence is an example. George Draper and his family assisted in filming in the area and served as wranglers and doubles for over 20 films from the 1950s through the 1970s. Barns and ranch buildings built with cement from the Portland Cement Company east of Florence by area entrepreneur Augustus Rose Gumaer in the 1860s are still in use on the 5,000- acre ranch and visible from Highway 67.

Over 40 motion pictures have been filmed in Fremont County including:

1948 – “Cañon City,” about a 1947 prison break from the Colorado State Penitentiary featuring Roy Best, the real-life Warden, as himself. Also in the film was DeForest Kelly, later of Star Trek fame.

1976 –“The Duchess and the Dirtwater Fox,” with Goldie Hawn and George Segal.

1977 –“How the West Was Won,” TV mini-series with James Arness, Eva Marie Saint, and Jack Elam.

1993 –“Cannibal! The Musical,” written, directed by, and starring South Park creator Trey Parker about “Colorado Cannibal” Alferd Packer who spent time at the Colorado Territorial Correctional Facility in 1885. Parker and South Park co-creator Matt Stone produced the movie while students at the University of Colorado, Boulder.

1872 - Prospectors and settlers stream in from the east in search of mineral and agricultural riches, the town grows rapidly and by 1872, and at only four blocks long, Cañon City is the booming county seat of Fremont County.

1887 - French explorers build a fort and trading post south of Florence and Senator James McCandless incorporates the City of Florence, affectionately naming it after his youngest daughter.

The Jeep Capitol of the WorldIf off-road adventure is your thing, Ouray is your manifestation. World-renowned for its exceptional mountain routes, Ouray has even been awarded Jeep's Badge of Honor status. These routes have historical significance as...
Read More