Fall is in the air, and as Halloween approaches, haunted places in Colorado are becoming a hot topic. Halloween events, fall festivities, and ghost tours are all fun things to do in the fall, but when the festivities are done, the bravest visitors in Colorado can test their mettle in one of the many haunted hotels, houses, and ghost towns in the state. Some of them have served as the site of some grisly murders or accidental deaths, and others have been plagued by mysterious happenings for decades. Still, these haunted hotels are some of the top haunted places in Colorado, and they’ll provide a fun and exciting stay… if you dare. 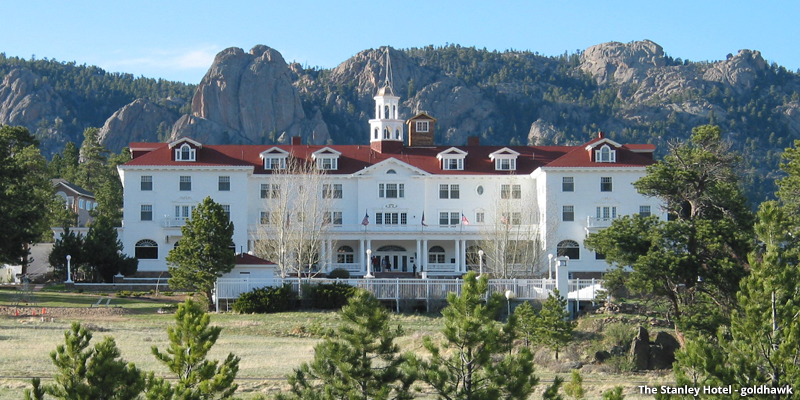 The Stanley Hotel in Estes Park is one of the most infamous haunted hotels in the US, and it’s largely due to the fact that this stately building served as the inspiration for Stephen King’s The Shining. Stanley’s hauntings are not just on paper—this hotel is said to be haunted by the ghost of Flora Stanley, the wife of the original owner, who plays piano in the grand ballroom, and guests have reported over the years hearing phantom footsteps, seeing lights turn on and off at random, and hearing voices that come from nowhere. Guests looking for a particularly spooky experience can request rooms 407 or 418, which seem to be the most active paranormal spots in the hotel. The Stanley Hotel is one of the top haunted hotels in Colorado, but if staying here is a bit too spooky for you, you could always opt for a short visit or perhaps a guided day or night tour of the hotel its grounds.

This beautiful hotel in the heart of Colorado’s ski country is called Hotel Jerome, but it also has another, more sinister name: The Bad Luck Hotel. Over the decades, an unusually high number of guests have checked into Hotel Jerome but never checked out. Among them is The Water Boy, the spirit of a little boy who drowned in the hotel pool in 1936, who appears dripping wet and shivering to guests in and around room 310, where his family was staying when he died. There’s also Henry O’Callister, who is said to have died of a broken heart and can still be heard weeping in the halls at night. The ghost of a former hotel maid named Katie, who died of pneumonia in the hotel after a prank gone wrong but still shows up to work, sometimes making beds and tidying up rooms before the current—and living—hotel staff can get to them.

The elegant Victor hotel was founded in 1899 by a pair of brothers, and throughout its history, it has been used as a grocery store, a bank, a jewelry shop, and a hospital. In the early 20th century, a man named Eddie lived there on the third floor. Late one night, Eddie woke up and tried to use the wrought-iron birdcage elevator to get down to the ground floor, but as he stepped in through the doors, he realized the elevator wasn’t there, and he fell to his death. To this day, the same historic elevator is still in operation, and guests on the third floor have noticed that it often opens and closes on its own. The elevator sometimes travels to the third floor without anyone calling it. Other ghosts include a friendly man in a black hat whom the hotel staff calls Charlie, the spirit of a young woman, and something that makes the sound of clanging pipes in room 307. The fourth floor of the building was once used to store corpses during the winter when the ground was too frozen to bury them, so it’s no surprise that some of the happenings at the Victor Hotel defy explanation. 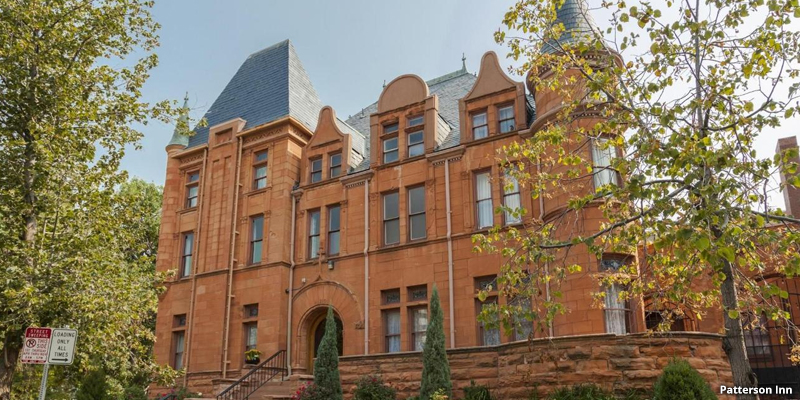 This beautiful mansion in Denver’s Cap Hill neighborhood is a luxury bed and breakfast now, but over the years, it has been a family home, an apartment complex, and an office space. It also bears the distinction of sometimes being called the most haunted house in Colorado and even has a book dedicated to its eerie history. Families that have lived there over the decades have reported drawers opening and closing on their own, phantom voices, and even on one memorable occasion, a spectral woman who introduced herself as Kate and helped a pregnant resident get out of bed. There’s a staircase to the third floor that people sometimes can’t get up all the way—they report feeling like there’s no oxygen about two-thirds up the stairs and have trouble breathing until they turn around. When the building was used as office space in the 80s, typewriters would often type on their own, and workers reported hearing strange sounds like party noises coming from closets or a baby crying on the third floor. But perhaps the eeriest story from this place comes from the 1970s when the Croke-Patterson Mansion was undergoing renovations. Workers would arrive to start their day only to find that all the work they had done the previous day had been completely undone. They blamed the vandalism on homeless people and hired some guard dogs to scare away trespassers. On the first night, one of the guard dogs became so afraid of something that it threw itself from a third-story window and died. On the second night, a second guard dog also threw itself from the same window, and when workers arrived the next morning, they found the third and final guard dog drooling and whining in a corner, completely terrified.

Sure, it’s creepy when a hotel has its own ghost, but how about the Hand Hotel Bed and Breakfast, where each of the 11 rooms has its own spectral host. The Hand Hotel B&B has been the subject of many paranormal investigations over the years, and its haunted residents range from phantom children who hide in the shadows to strange scents that waft through the rooms and halls. In Grandma Head’s room, a rocking chair commonly starts rocking back and forth on its own, and in the kitchen, there is said to be a pair of ghostly twin girls who cause mischief. None of the ghosts at Hand Hotel B&B have ever been known to be angry or malicious, so this one is actually quite pleasant as far as haunted destinations go.

This 19th-century hotel on Cañon City’s Main Street isn’t currently in operation, so you can’t spend a night in its once-grand guest rooms, but historically, this space has been said to be the home of several playful and mischievous ghosts. The spirit of a young girl has often been spotted in the halls of Hotel St. Cloud, carrying and playing with a ball, and she is perhaps the reason behind a number of mild practical jokes that were played on guests who stayed here. Guests often reported lights that turned on and off. These personal belongings went missing and were eventually found hidden around the room, and coming back to the hotel to find furniture moved or even stacked on top of other furniture. 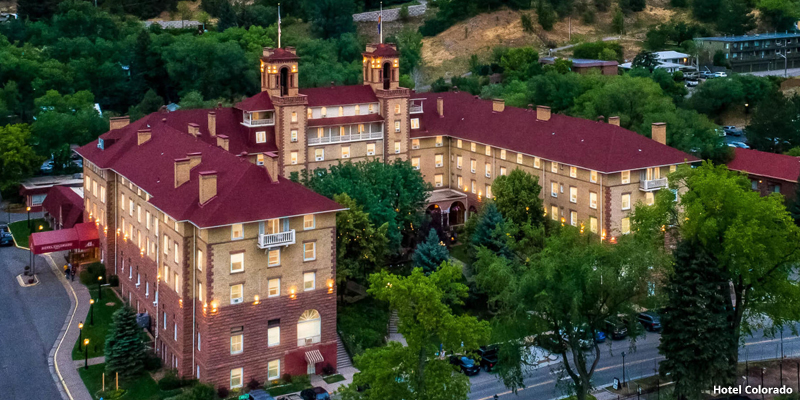 If you’re a night owl staying in Glenwood Springs at the Hotel Colorado, you might hear some paranormal activity during the wee hours of the night. Often, guests report hearing elevators moving on their own or the strong scent of cigar smoke wafting down the hallways of the hotel, but generally only between the hours of 2 am and 4 am. Unexplained knocking, clanging dishes in the dining room, flickering lights, and even the disturbing sound of a woman screaming, thought to be the spirit of a woman murdered in a love triangle gone wrong, are among some of the other spooky happenings in Hotel Colorado. 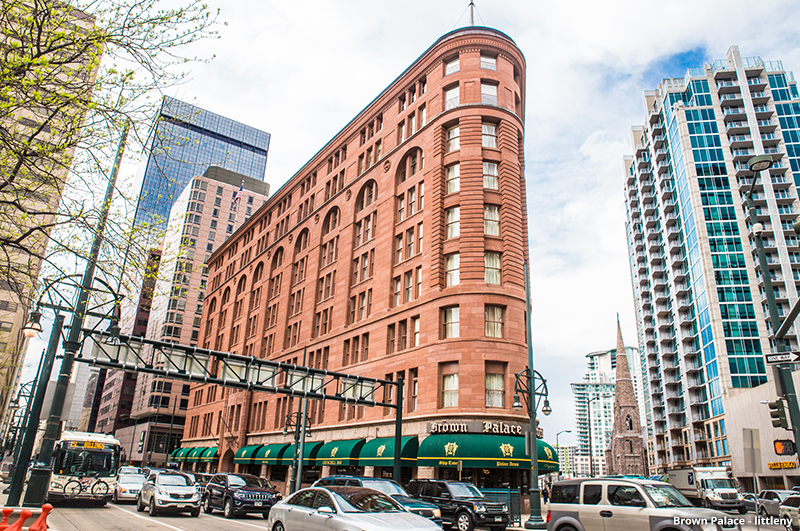 Louise Crawford Hill was a guest who once lived in the rooms on the upper floors of this classic and historic Denver hotel, which is the second oldest still-operational hotel in Denver. When Louise Crawford Hill was alive, her life was sad and tragic; after her death, when tours of the historic hotel began to be offered, guides would sometimes tell her story. But shortly after this practice began, the front desk started receiving phone calls from the rooms where Louise had once lived, but there was no one on the other line. The staff speculates that perhaps the phone calls are from Louise, who doesn’t like her story being told.