The Heart of the Watershed 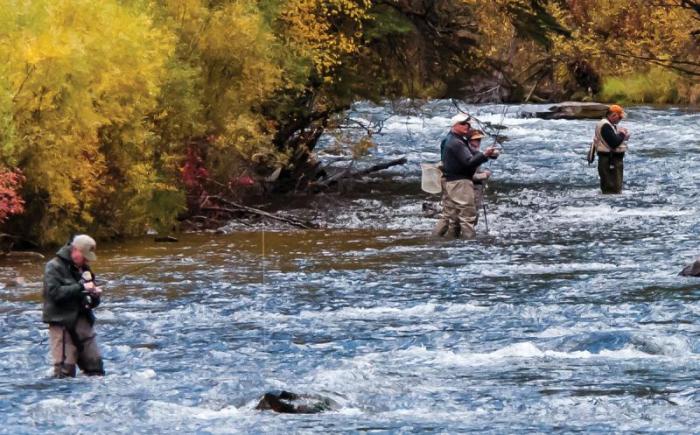 The Fryingpan and Roaring Fork rivers divide and define Basalt, as inescapable as the ocean in a beach town.

The town’s passion for the rivers was demonstrable as locals and Town officials recently debated the fate of the “Pan and Fork,” once home to a densely-populated trailer park. The five-acre site on the north side of the Fork just below the confluence with the ‘Pan aroused an intense political discussion around the land’s future: how much would become a public park and how much will be developed with commercial and residential buildings? Everyone in and around town has a vision for the rarefied riverfront and the conversation took in complex urban planning theories, “downtown” vitality, and the connections between man and nature, both dividing and uniting the local community.

“People in Basalt love their rivers, whether they’re fishing, walking, bike riding or watching the American dippers or the mallards,” said Rick Lofaro, executive director of the Basalt-based Roaring Fork Conservancy, which works to protect local rivers and water quality. “The rivers connect everybody in the valley, whether they’re boating or fishing or just enjoying the view.”

In fact, the Basalt Chamber’s slogan is “Confluence of Rivers, Recreation and Culture.” 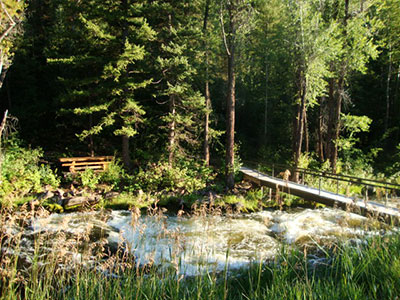 Most valley residents, whether anglers or not, both know and boast that the Pan and the Fork are so-called gold-medal trout streams that attract fishermen from around the globe. Some even know that Basalt is the only town in North America to offer two.

The Colorado Parks and Wildlife designation reflects healthy fisheries with abundant and frequent insect hatches. Specifically, gold-medal waters must produce 60 pounds of trout per acre, and at least 12 trout per acre measuring at least 14 inches long — more and larger fish per unit of water.

Of the 9,000 stream miles in Colorado, only 322 qualify for the signature, so the 36 miles in this watershed (14 on the Fryingpan, 22 on the Fork) are a point of pride for residents from Aspen to Glenwood Springs. For Basalt specifically, the rivers are vital economic engines. The Lower Fryingpan in particular contributes roughly $3.8 million to the local economy each year in guided fishing trips, meals, hotel stays, gear sales, and more.

If you’re interested in a guided fishing trip, contact Fryingpan Anglers or Taylor Creek Fly Shop. Both are located in downtown Basalt and have experienced guides who can customize a trip for any skill level or preference. Whether you want to wade into a gentle, willow-fringed trout stream, float the broad waters of the lower Fork, or hike to a secluded mountain lake in search of cutthroat, these local fly shops can take you there.

“I’m originally from Ohio,” said Marty Joseph, manager and guide at Fryingpan Anglers. “On the Mahoning River, where I grew up, you don’t even want to enter the water because of E. coli. For me, to come out here and not only fish these rivers avidly but also just float — I love to float the Fork on the Fourth of July and watch the fireworks — is amazing.”

As Joseph implies, the benefits of these iconic rivers extend far beyond just angling. For boaters and stand-up paddlers, a future whitewater park is in the works near Fisherman’s Park on the Roaring Fork at the east end of Basalt. During the warm months on the Fryingpan, painters and photographers can be seen along the banks trying to capture the postcard-perfect mountain scene. Kids love the swimming hole at Strawberry Rock, near mile marker 3 on Frying Pan Road. Others love to picnic along the Roaring Fork at Old Pond Park on Two Rivers Road or walk their dog on the opposite bank near the public library. 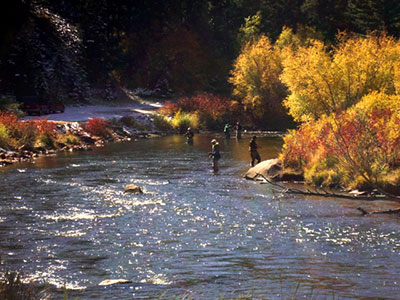 And let’s not forget the wildlife. A pair of nesting ospreys have returned for summer 2016 near the Emma Curve on the Roaring Fork, and majestic bald eagles often winter in nearby Snowmass Canyon. Up the Fryingpan, bighorn sheep are a common sight in the red-rock section of the valley from miles 2-8.

“I see a lot of bighorns along the road or climbing up the red rock,” said Basalt Chamber CEO Robin Waters, who drives Frying Pan Road every day. “I often see fox and turkey, and twice followed a mama bear and her cubs running ahead of me on the road.”

As perennial sources of pure mountain water, the Roaring Fork and the Fryingpan are, quite literally, the lifeblood of the valley for all residents, human and otherwise.

“These rivers serve the needs of valley residents — the stoneflies, mallards, and elk as well as the ranchers, recreationists, and people watering their lawns,” said the Roaring Fork Conservancy’s Lofaro. “The iconic nature of this valley has always been focused on skiing, but increasingly people come from all over the world for these rivers.”

And Basalt — which Lofaro calls “the heart of the watershed” — is where it all comes together.