The History Behind the Colorado Flag

It doesn’t matter if you’ve been in Colorado for a lifetime or twenty minutes—chances are, you’ve seen our colorful, iconic Colorado flag, either waving cheerfully in the breeze on a flagpole, or on a hat, t-shirt, beer can, backpack, mural, highway sign, or tattoo. Coloradoans love our flag, but not everyone knows where it comes from.

The History of the Colorado Flag

In 1910, the Daughters of the American Revolution met in Denver and decided the state needed a flag. What they didn’t know is that it already had one, though it wasn’t the one you’d recognize today. The original Colorado flag, on a field of blue, featured the state seal, and the words “Union and Constitution,” as well as the latin phrase “Nil Sine Numine,” which means “Nothing Without Providence.” Not exactly an inspiring or memorable design. It was introduced in 1907, but luckily for the Daughters of the American revolution, the only existing copy of it was sitting in a janitor’s closet at the State Capitol, completely unused. And to be honest, it doesn’t seem like anyone really cared about this flag or tried to stop them from creating a new ones.

Within a month of the original meeting, the D.A.R. had created a number of preliminary designs and narrowed down their selection to one. The proposed flag design had three stripes just like the current flag, but the white stripe was sandwiched by red, not blue, and it was the Colorado seal that stood proudly in the middle of the design. The D.A.R. took it to the state senate and no one had any problem with declaring a new flag, except for the one small fact that no one actually liked this new design by the D.A.R.

Enter Andrew Carlisle Carson, who submitted a vision for a flag with two blue horizontal stripes on either side of a white one, and a red “C” with a gold center, offset to the side of the flag, near the pole. This version passed through the Colorado Senate without any opposition whatsoever, and just five months after the D.A.R. set out on their mission for a new flag, the Colorado flag passed through the Senate, and then through the House of Representative just a month later. On June 5, 1911, Colorado officially had a new flag (less than five years after declaring it’s FIRST new flag, though thankfully, this one stuck).

The wording surrounding the legislature of the flag even designates the right to use it “with the privilege of use by all citizens upon such occasions as they may deem fitting and appropriate,” meaning all those beanies and t-shirts and earrings you see with the Colorado flag on them are explicitly allowed by law. So wear that Colorado flag with pride, because that’s exactly what the creators intended! 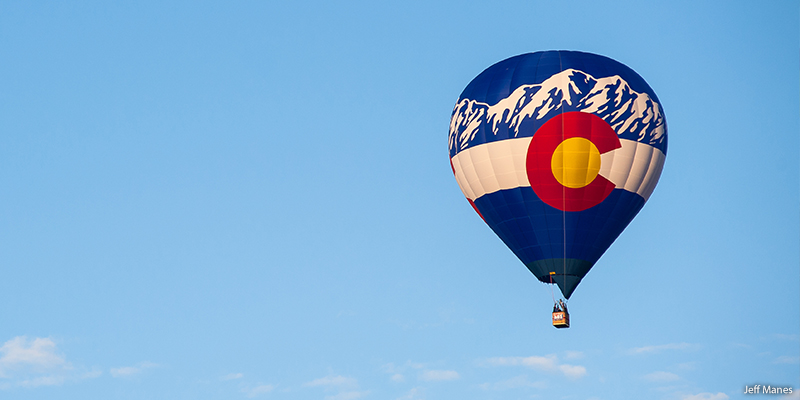 Meaning of the Colors

What you may or may not already know about the Colorado flag and its vibrant colors is that each of them represents a different part of Colorado’s natural landscape. The blue of the stripes represent those gorgeous Colorado skies, and the white signifies the snow-capped peaks of the Rocky Mountains. The golden circle stands for our bright, Colorado sunshine, and the red “C” that it’s wrapped in signifies the red rocks and earth that are so iconic to our state.

When the flag was invented, the creators and legislators forgot to specify how big the “C” had to be, or what shades the colors had to be, so it’s not uncommon to find versions of the Colorado flag, especially older ones, where the “C” fits entirely inside the white stripe, or where the blue is much lighter in hue. In 1929, the Colorado General Assembly decreed that the red and blue should be the same color as the American flag, and in 1964, they decided the diameter of the gold disc should be the same width as the white stripe.

Colorado’s Flag vs. Other State Flags

Every state has its own flag, but few are as commonly flown (and worn!) as the flag here in Colorado. While many states use their state seals, which can be complicated and full of symbolism that’s difficult to recreate or remember, the most memorable state flags tend to be simple and iconic. The clean lines and bold colors of the Colorado flag make it easily recognizable and very memorable, much like the bold star and shapes of Texas’ Lone Star flag, or the Zia sun symbol of New Mexico. Whereas you won’t find the personified forms of Liberty and Justice of the New York state flag on many t-shirts, the Colorado flag is a beloved icon of our state, which has become just as synonymous with our culture, nature, and way of life as the very mountains for which we are so well known.

Next time you see the Colorado flag waving proudly from a neighbor’s house or a local government building, or see it displayed like a badge on a friend’s t-shirt or a can of locally-brewed craft beer, know that you are in a state that values its mountains, its sky, its sunshine, and its red earth, but also its people and their right to wear their flag with pride.