The development of narrow gauge rail affected Colorado in two significant ways in the 1800s and early 1900s. These trains were able to access remote areas, mining towns in particular and moved ore to smelters. They also impacted population growth. While the ore moved out, people moved in. The cattle industry was altered too. Instead of having to trail cattle for many hundreds of miles to their ultimate destinations. Significant train junctions aided the process of getting cattle to market. However as civilation progressed, so did the use of trains. Today, most of the narrow gauge trains used to access mining towns have turned into scenic train rides, where the journey is more important than the destination, and cattle are transported by trucks. 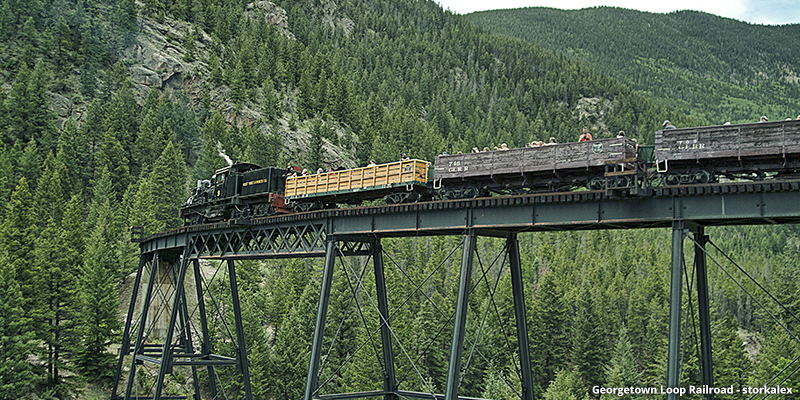 In the 19th and 20th centuries, railroads were a primary source of transport, both of people and goods. The gold and silver mining boom was a significant motivation for narrow gauge rail construction and the subsequent population growth. However, during the 1860s the Union Pacific Railroad bypassed Denver in favor of Cheyenne, to facilitate the cattle industry. That was almost the end for a lot of early Coloradans until the Denver Pacific Railroad was built to connect the Front Range to the rest of civilization. There were no roads during that time period. The only means of traveling west was by wagon team or rail. Getting through the Rockies by train was not easy, but in the height of the Colorado mining boom, it was important to find some way to access these remote areas. Narrow-gauge railways became a popular solution as it was easier for trains to maneuver around the tight curves and rough terrain of the mountains than traditional railways. In the past century or so, most of these railways have gone out of use, but some have found new purpose as scenic railways for tourists and sightseers, and they offer an incredible look at the Rocky Mountains that is hard to come by in a car or on foot.

Leadville is the highest incorporated city in the US, with an elevation of over ten thousand feet, so it only stands to reason that the Leadville, Colorado & Southern Railroad has some truly unbeatable mountain views.

The gold discoveries in Leadville during the 1860’s created a rapid rise of boom towns and population growth. Inevitably, railroads raced to construct tracks to access and serve these growing and profitable towns. The Denver, South Park, and Pacific Railroad became the railroad to serve Leadville during this time. Today visitors can ride this narrow gauge rail which takes passengers along some of the historic South Park and Pacific lines. More specifically, the train takes passengers up 1,000 feet from Leadville, through the untamed wilderness of the SanIsabel National Forest for amazing views of Fremont Pass, Mt. Elbert, Mt. Massive, and the Arkansas River Valley. Learn more about the Leadville Train and the specials they have to offer. 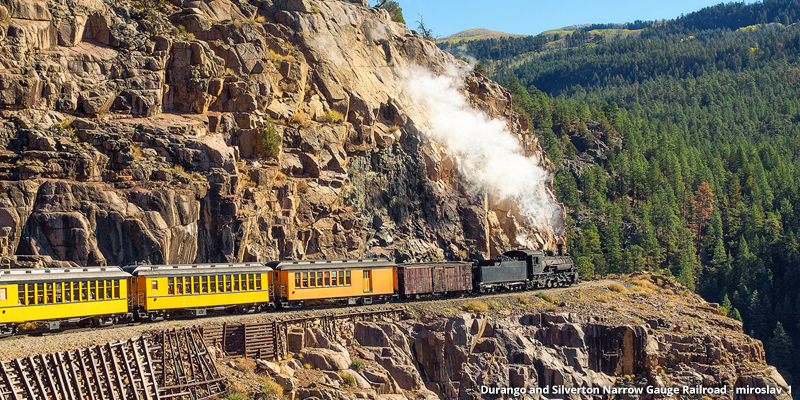 Treat yourself to some real history aboard the Durango & Silverton Narrow Gauge Railroad & Museum. The city of Durango was founded by the Denver & Rio Grande Railway in 1879, and two years later the railroad arrived in town. That same year construction began on the line to Silverton, and in 1882 the tracks were laid and movement of passengers and freight began.

Although it was meant to transport silver ore from the mines in Silverton to the smelters in Durango; this line created an important transportation link that supplied high mountain communities with necessities and comforts of life. It soon became a favored means of transportation by passengers who appreciated the view, and has remained popular with tourists to date, operating now for over 130 years – much to the delight of today’s vintage locomotive enthusiasts who are still thrilled by the same sights of passengers in the 1800s. Learn more about the Durango Train.

The Georgetown Loop Railroad dates back to 1877, as a freight route to and from Georgetown and Siler Plum. The two profitable silver mines in the area. Once rollicking mining towns that are two miles apart by way of narrow and steep canyons. The primary purpose of this train was to haul silver ore; however, it quickly became popular with tourists. The 4.5 mile route includes the famous Devil’s Gate high bridge, considered to be an engineering feat. The route gains more than 600 feet in elevation along the way and includes a total of four spectacular bridges.

Today, you can take this incredibly beautiful narrow gauge railroad through Clear Creek Canyon, from Georgetown to Silver Plume, where you can disembark and tour the historic Lebanon silver mine, which dates back to the 1870s, or the Everett Mines, which are from a similar era. You can explore the mines, learn about their history, and even pan for gold, before hopping back on the train for a scenic return ride along the loop. 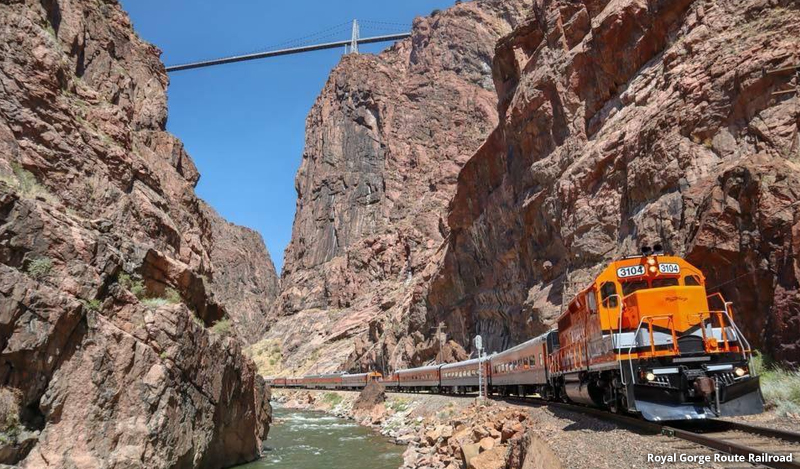 The small town of Cañon City has a truckload of Western, cowboy history and flair, and the impressive dramatic gorge which borders the town is a huge part of that appeal.

Originally, the Royal Gorge Route was created to service Leadville and the silver mining operations. In the beginning both the Denver & Rio Grande (D & RG), and the Santa Fe railroads wanted to lay the tracks. This conflict resulted in a two-year struggle between railroads, primarily due to the Royal Gorge obstacle. Ultimately D & RG was granted the primary right to build through the gorge.

The Royal Gorge is incredible seen from both above and below, and if ziplining across its death defying depths isn’t for you, or if you’ve already done that and are looking for a different vantage point, the Royal Gorge Route Railroad is there to offer a beautiful and fun experience. The beautiful, historic train traverses the gorge alongside the Arkansas River, and passes by abandoned mining buildings, an old wooden water pipe, and some pretty gorge-ous scenery (pun intended). Guides in each of the cars are available to answer questions and point out interesting sights along the way.

How many people can say they’ve taken a train to the summit of a 14,115 foot mountain? This train near Colorado Springs, which uses a cog track to traverse the 8.9 mile trip up and down a mountain slope with grades as high as 25%, will get you there. Manitou and Pikes Peak Cog Railway is the highest cog railroad in the entire world, and the ride to the top of Pikes Peak, in an open air car, will take you through beautiful mountain forests, above dramatic ravines, past gorgeous alpine lakes, and up above the treeline to the rocky and beautiful summit of Pikes Peak. Along the way, your guide will tell you stories about the early pioneers who attempted to summit Pikes Peak on foot, including Zebulon Pike himself, for whom the mountain is named, and give information about the sights and wildlife you pass. The cog railway was originally built as a tourist train and has been in use by passengers and tourists since 1889.  In 2018, Manitou and Pikes Peak Cog Railway closed for business due to safety concerns about the historic cog tracks. The entire track has been rebuilt and is open for business again.