The Stanley Hotel in Estes Park

Whether you’re a Colorado native or a tourist, the beautiful town of Estes Park is worth visiting. One of the most beautiful small towns in the state, it borders the entrance of Rocky Mountain National Park, across which Trail Ridge Road passes, the highest paved road in the continental United States.

One of the most iconic historic hotels in America, the Stanley was built by Freelan Oscar (FO) Stanley and opened on July 4th, 1909. It primarily aimed at wealthy Easterners as a health resort due to its high elevation and clear, cold mountain air. The dry cold air was beneficial in treating tuberculosis at a time before antibiotic drugs were discovered. In fact, Mr. Stanley suffered from the disease, and he moved to Estes Park, for the summer months, on his doctor's advice in 1903. He and his wife Flora came to Colorado in March and visited the Estes Valley in June.  They enjoyed the scenic beauty and rustic appearance of the town. Over the summer months, his health improved greatly due to the fresh air and sunshine. In fact, Mr. Stanley found the area so beautiful and conducive to good health that he stayed in Estes every summer for the next thirty-seven years. In 1907, he built a hotel in Estes Park, as the local accommodations were cozy but not very “posh.” With its stunning scenery and healthful high-altitude climate, Stanley realized its potential resort value, knowing it would attract wealthy people from his social circle back in the Eastern part of the country. The property was purchased, 6,000 acres, from the Dunraven Ranch, which, as you might expect, has its own unique history going back to the 1870s and is related to the Homestead Act (62. Construction began in 1907, and it was called the Hotel Stanley, a 48-room grand hotel that catered to rich urbanites in Stanley’s social circle. It was proposed to be called the Dunraven Hotel, but after a local town vote, it was decided that the name Stanley was more fitting, as Mr. Stanley was the prime mover for the project. 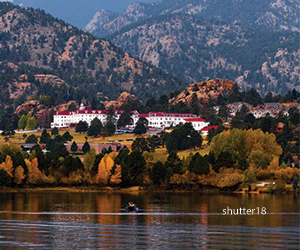 The timber used to build the hotel came from the nearby Bear Lake area, which had experienced a wildfire in 1900. This fact accounts for the faint smell of burned wood, which is still present today, though only noticeable during the summer and then only when the humidity is high.

Though Bear Lake is within the boundaries of Rocky Mountain National Park today, when the Stanley Hotel was built, it was on private land purchased by Stanley. It wasn’t proclaimed as a national park until 1915, and is its own story. It is a classic “land grab” tale, and ties in with the history of the West.

Kodak and The Steamer Car

It is also worth mentioning that Mr. Stanley and his twin brother Francis Edgar were the dry plate photographic process inventors, which was fundamental to modern photography in the pre-digital age. The brothers sold their discovery to George Eastman, who would soon form the Eastman Kodak Company. Subsequently, the brothers Stanley focused their attention on the development of a steam-powered automobile. They founded the Stanley Motor Carriage Company in 1902. They developed and produced steam-powered “cars” until 1924, when gasoline-powered, internal combustion engines became widely used in other transportation modes, including aircraft. As regards the hotel, Stanley used a version of his steam-powered vehicle, essentially a bus, to transport guests up from Loveland to Estes in the first years of hotel operation. The subject of the steam-powered vehicles is its own story.

Far and away, the most interest in the Stanley Hotel comes from its association with the bestselling 1977 Stephen King novel, The Shining, and its 1980 movie 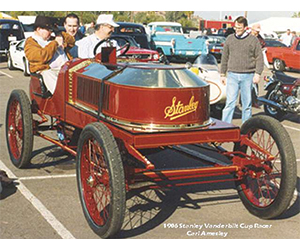 adaptation of the same name. While the hotel is called The Overlook in the novel and film, it is well known that Mr. King stayed at the hotel, and was inspired by his family’s one-night stay, just before the hotel closed down for the winter. The combination of the nearly empty hotel, the elegant decor, the winter setting in, and his vivid imagination resulted in his sketching out the basics of the story. If you’ve read the book or have seen the movie, you know the result. Terror and madness, ghosts, blood, snow that never seems to stop falling.

The Stanley Hotel, with all its associated, interesting history, is still open for business and thriving in the twenty-first century. It’s many buildings and grounds have been carefully maintained and modernized. Weddings, concerts, and other activities are held throughout the year, and of course, it still is a first-class hotel with every conceivable amenity. If you’re heading to Estes Park, it is a beautiful place to visit or stay. I can personally attest to its beauty, as I have walked through the ground floor, while outside was a wedding reception in progress. I didn’t stay at the Stanley, however, so I can’t describe any paranormal activities, which by all accounts, regularly occur.