Ridgway, just north of Ouray, nestled in the picturesque Uncompaghre Valley, and very much a sister town to Ouray. This small town is surrounded by the majestic snow-capped peaks of the Cimarrons and San Juans, some of the most photographed mountains in the world. The town is located at the northern entrance of the San Juan Scenic and Historic Byway, one of America’s most spectacular highways. With nearly 300 glorious days of sunshine, it is the perfect town to enjoy and explore a broad spectrum of outdoor activities and year-round cultural events.

A quiet western town with charismatic energy – Ridgway is a way of life. The town was founded in 1890 as the headquarters of the world-famous Rio Grande Southern narrow gauge railroad serving the area’s rich silver and gold mines, ranches, and farms. Namely, Ouray's booming gold rush period during the late 1800s, and further on down the road, Telluride and Silverton too. Today the railroad is gone, but its memories remain at the acclaimed Ridgway Railroad Museum. The ranches still dot the valley, preserving open space so special to the area. There is also an amazing wildlife presence throughout the region. Most famous are the bald eagles which nest in the cottonwoods along the Uncompaghre River.

Located 37 miles east of Telluride and 10 miles north of Ouray. It's a gateway essentially to these two mountain towns. Hwy 550 passes through Ridgeway and travels south to Ouray. It continues south out of Ouray towards Silverton and becomes known as Red Mountain Pass or the Million Dollar Highway. This pass is considered a dangerous mountain pass as it tops out at 11,018 feet. It's usually open year-round but can be closed at any time due to rock slides, flash floods, and avalanches, which are frequent in the winter. The pass is known as a "killer" in the winter and is littered with markers of people who have died up there. There are sections of this highway that are very steep, with sheer drops on one side and no guard rails to allow for winter plowing.

Take Highway 62 west towards Placerville en route to Telluride, which you will find to be an easier drive, and a bit more pleasant. Follow Cottonwood and Dallas Creek before crossing the Dallas Divide at 8,983 feet. Then head down through Leopard Creek Canyon. Highway 62 is part of the San Juan Skyway and is designated as a National Scenic Byway. 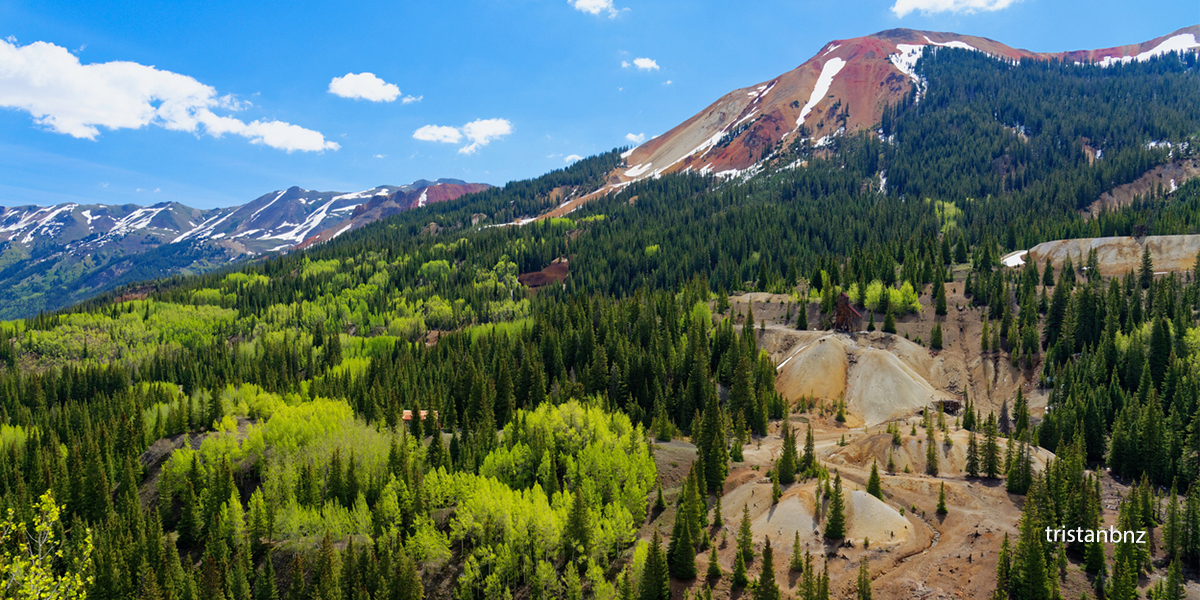 Ridgway, as a designated Creative Arts District, is also known for its vigorous arts community. The town boasts a new concert stage in Hartwell Park which is home to the summer outdoor Concert Series. In addition, the newly-restored Sherbino Theater offers music, movies and much more. Several studios, galleries, and sculptures are here to discover. Dozens of one-of-a-kind, family-owned shops and several award-winning restaurants plus a local brewery and a distillery make this an exciting place to settle in and spend some time.

Ouray This small, intimate community is nestled in some of the most rugged and towering peaks of the Rockies. Set at the narrow head of a valley and surrounded on three sides by 13,000-foot snow-capped peaks, Ouray has been nicknamed the “Switzerland of America.”

Named a National Historic District, Ouray is abundant with old Victorian architecture and history. Stop by the Visitors Center or Historical Museum and pick up a complimentary Historical Walking Tour brochure.

The natural hot springs, so magical to the Ute Indians still attract people from all over the world. For more than half a century, the Ouray Hot Springs Pool has provided a relaxing, family-oriented environment.

The mountains that encompass Ouray provide a great playground for activities such as jeeping, horseback riding, hiking, mountain biking, and rock climbing. Explore Box Canyon Falls and Ouray's other parks to view a spectacular 285-foot waterfall that plummets into a narrow quartzite canyon. Revel in the national forest and public lands that completely surround Ouray and take advantage of its unique location along both the Million Dollar Highway and the San Juan Skyway.