Rocky Mountain National Park has been on a lot of our minds lately. The Cameron Peak Fire and the East Troublesome Fire have both ravaged its borders, burning through some of the park’s beloved wilderness, and as we’ve watched the destruction and prayed for snow (hooray snow!), many have taken to social media to share their favorite memories of this timeless, beautiful piece of Colorado. But how much do you know about Rocky Mountain National Park, beyond its abundance of elk and the twisting turns of Trail Ridge Road?

Rocky Mountain was designated a national park in 1915, making it the 9th national park in the US and the second in Colorado, after Mesa Verde National Park, but its history goes back a lot further than that. About 11,000 years ago, humans first began to inhabit the inhospitable valleys and mountains of the region, and until the late 1700s, the Ute Tribe lived there on and off, though never year-round. Some of their ancient trails are still in use today as hiking trails in the park. In 1803, with the Louisiana Purchase, the area became part of the young United States, though the rugged terrain meant most people avoided it. Even fur trappers, hunters, and explorers went around the area to try and find easier access, including Stephen H. Long, whose name you might recognize from the famous 14er within the park’s borders. As time went on and the gold rush began, the surrounding areas began to be more populated, though homesteaders found the harsh winters to be difficult for their grazing animals. 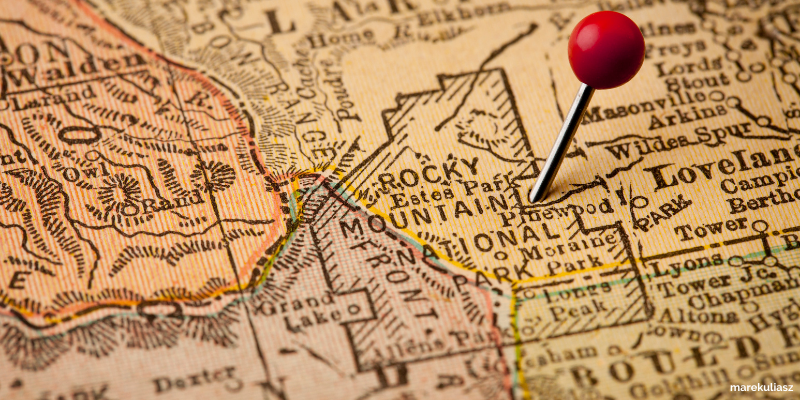 As the population in the Rockies began to grow, so did the number of tourists seeking access to the incredible landscapes and vistas of the Rocky Mountains. In the late 19th and early 20th century, a preservation movement swept through the US that notably included the designation of Yellowstone as America’s first national park in 1872. Local naturalists in Estes Park began to petition in 1909 for Rocky Mountain to become the nation’s 10th national park. In 1915, after Glacier National Park, it became the 11th in the country (though due to the decommissioning of Mackinac National Park and the combination of Rock Creek Park into National Capital Parks, Rocky Mountain National Park is currently the 9th oldest national park in the US).

During the Great Depression, when millions of American citizens were out of work, President Franklin Roosevelt created the Civilian Conservation Corps (CCC) to help people find work. It’s thanks to the CCC that we have many of Colorado’s treasured icons, including Red Rocks Amphitheater, and Rocky Mountain National Park was home to six CCC camps. The CCC built many of the roads, trails, and lodges that we still use today when visiting the park, including the world-famous Trail Ridge Road.

After World War II left the park in decline, the mid and late 20th century brought a lot of new life to Rocky Mountain National Park. It was during this time that many of the visitors centers were built, as well as many of the modern campgrounds and parking lots you’ll find there today. It was also during this era that the park began to institute more rules and protections to preserve wildlife. Before these regulations, it was common for visitors to off-road their vehicles into the backcountry wherever they pleased, or hike through delicate ecosystems, trampling tundra flowers that would take years to recover. Rangers responded to these transgressions by educating visitors about the wildlife around them and teaching them why it was important to help preserve it, which is the basis for how the park operates today.

Trail Ridge Road - a 48-mile stretch of highway that runs from Estes Park on the eastern edge of the park to Grand Lake at the western gateway. Trail Ridge Road runs for 11 miles above the treeline and reaches an elevation of 12,183 feet, making it the highest continuous paved road in the US. It follows a path that has been used by Native Americans for hundreds of years, and its twists and turns take you through a number of mountain ecosystems, allowing you to see forest canyons, alpine tundras, lava cliffs, and more.

Longs Peak - This 14,259-foot behemoth is the 13th tallest peak in the Colorado Rockies, and you might recognize it as the symbol of Colorado on our state quarter. Along with Pike’s Peak, it’s one of the most recognizable mountains in the Rockies, especially for those who live in the Front Range. While it’s gorgeous to look at, Longs Peak is actually one of the most difficult mountains to summit, and the arduous and technical trail should only be attempted by those who know what they’re doing. 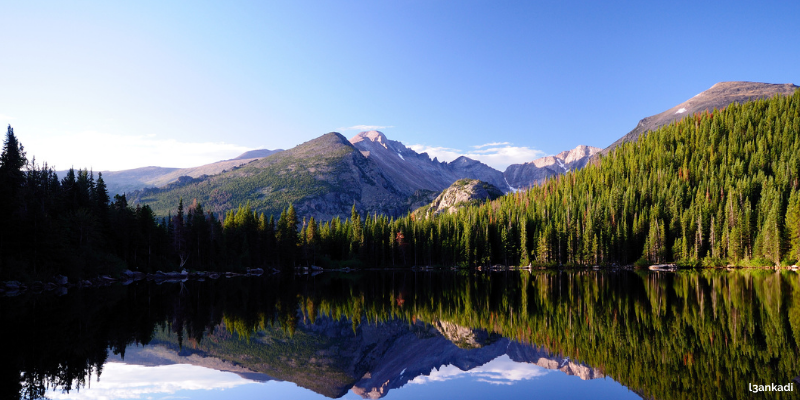 Bear Lake - This beautiful mountain lake is a great place to get out, walk around, and take pictures. It’s short and accessible, and it’s also one of the most popular sights in the park, so be prepared for a crowd. For those of you interested in more of a hike, it’s also the jumping-off point for a number of fantastic hikes, including those to Emerald Lake, Flattop Mountain, Sky Pond, or Cub Lake, depending on what kind of activity level you’re looking for.

With thousands of visitors every single day, even in the winter and throughout the limited capacity regulations of the pandemic, Rocky Mountain National Park is an iconic part of our state’s geography and culture. You could explore a different part of the park every day for the rest of your life and still never see everything it has to offer. Whether you’re watching a herd of elk in Beaver Meadows, gripping the edge of your seat around some of the turns on Trail Ridge Road, or waking up in the wee hours of the morning to trek the difficult trail to conquer Longs Peak, Rocky Mountain National Park is one of the most beautiful and unforgettable places in Colorado, a state FULL of beautiful and unforgettable sights. Next time you’re in the vicinity or Estes Park or Grand Lake, give this Colorado classic a visit, and try to discover something new that you love about our state.