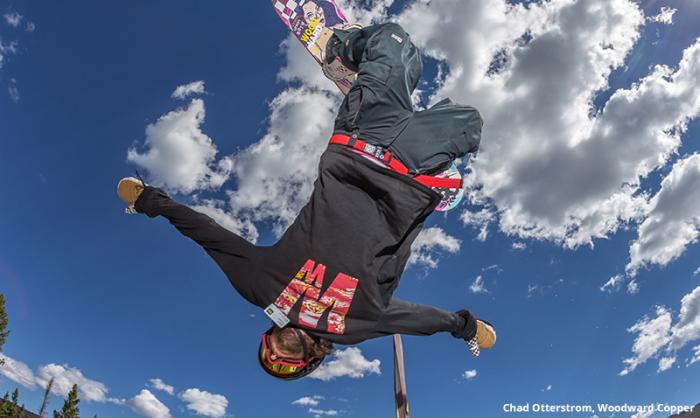 In addition to running the on-snow show at Woodward Copper, Barr helps tip exceptional athletes toward national (and international) wins.

As on-snow supervisor at Woodward Copper, Ronnie Barr, 31, oversees everything from ski and snowboard camps to all of Woodward’s lessons and coaching products. But his real superpower may be training youth athletes to compete at Shaun White and Torah Bright levels.

Tell me about working with Trevor Jacob.
I met Trevor when he was a 14-year-old skate and snowboard phenom at Mt. Hood in 2007. He was a tremendous talent, but different than most. My main job with him was to remind him that he rode for fun; that he loved snowboarding.

And how’d you do that?
He was into snowboard cross, so it was go out and ride really, really fast—while working on fundamentals. He also worked on strength building and cardio, both at Woodward. We’d have Trevor do intervals on the trampolines; putting a training board on his feet and having him jump around at a high-intensity.

What was the outcome?
He placed 9th in snowboard cross at Sochi in 2014.

Any other athletes you’ve really enjoyed working with?
That’d be Sy Moran. I’ve spent seven years on and off working with him.

And how did you come to train him?
We met through a program called Freestyle Bombers when he was 14. I spent an entire season working with him on his board control, air awareness, and body control. Then we progressed toward getting him comfy flipping—doing rodeos, backflips.

That's where Woodward came into play for him. He learned air awareness by doing double corks and double flips into the foam pits. Being able to start at such a young age led to him executing those on snow at 18.

What’s Sy doing now?
He rides with Burton and Oakley. He still competes, he’s in Australia right now. When he gets back, he’ll go into the Rev Tour to begin building points for nationals in slopestyle.

So will you train him any longer?
He’ll come back to Woodward and train with me when he can. But like all pro snowboarders, his schedule never allows him to stay in one place for too long.