When was the last time you took a moment to look up into the night sky? If you live in a city or well-populated area, you might only spot a handful of bright stars shining, but if you live in the plains or the mountains, you’ll probably see a lot more. Light pollution washes out starlight, especially from sky objects like nebulae or galaxies, which have a lower surface brightness than the stars we can still see from populated areas, and because of it, the vast majority of Americans can’t even see the Milky Way when they look up at the stars at night.

Areas without significant light pollution are known as Dark Skies, which are protected by the International Dark Sky Association, and luckily for us, Colorado is home to a few of them, so next time there’s a meteor shower in the forecast or you’ve got a hankering to gaze up into space, here’s a quick guide about how to do it best.

Where Can I Stargaze in Colorado?

There are only about 130 International Dark Sky Places in the world, where communities, parks, or preserves not only have a gorgeous nighttime view, but also make a conscious commitment to protecting the visibility of the beautiful night sky. There are two IDSP parks and two IDSP communities in Colorado where stargazing is absolutely fantastic.

At Black Canyon of the Gunnison, they like to say, “Half the park is after dark!” This incredibly beautiful gorge is stunning during the daytime, but once the sun goes down, viewing a sky awash with stars gives the park a whole extra dimension of beauty. If you’re on the South Rim of the canyon, head to Chasm View, Dragon Point, or Sunset View for an incredible stargazing spot, and if you’re on the North Rim, try Chasm View Nature Trail or Kneeling Camel View.

Another of Colorado’s four national parks—Great Sand Dunes—is spectacular for stargazing, and very accessible for families or people who aren’t up for a long hike. Great Sand Dunes National Park offers night programs during the summer months where you can learn about nighttime wildlife, astronomy, and more.

These two adjacent towns are about an hour west of Pueblo, and they are known as an International Dark Sky Community. They were the first place in Colorado to be recognized as a Dark Sky location, and these days, if you pay them a visit after dark you can watch the stars at a Star Party in Bluff Park, or from Smokey Jack Observatory, where a massive, fancy Schmidt-Cassegrain telescope awaits you.

The community of Norwood is the first Dark Sky Community in Southwestern Colorado. In Norwood, a dedicated group of astronomers have teamed up to educate their community about the night sky and make their home a great place to see it. With educational Star Parties where you can check out the stars using their telescopes, and regular news articles and columns about astronomy in their local papers, you’ll find Norwood is a place to learn about the stars whether it’s daytime or night. (But especially at night!)

These are just the IDSP locations in Colorado, but there are countless other places where you can get a great view of the night sky. As a general rule, stargazing is better West of the Continental Divide or South of Colorado Springs, far from the lights of the Front Range cities. Higher elevations mean less atmosphere between you and the stars, and open spaces mean more sky for you to look at. Some popular locations for stargazing include Rocky Mountain National Park, the UFO Watchtower in the San Luis Valley, Pawnee National Grassland, Echo Lake near Mount Evans, and Canyons of the Ancients National Monument in Cortez. 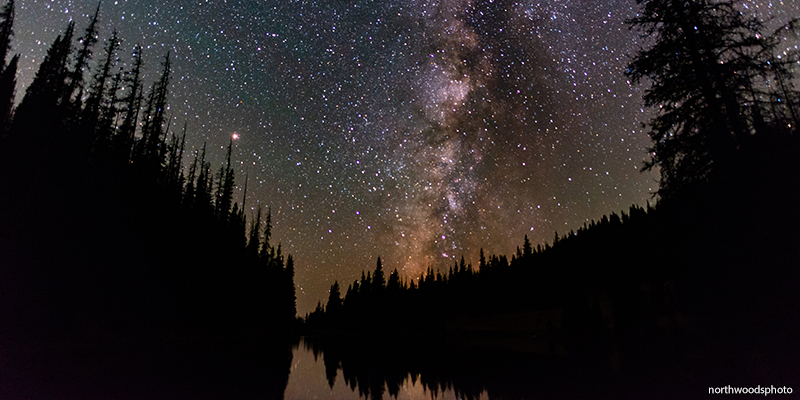 When Is the Best Time to Stargaze in Colorado?

First and foremost, stargazing is obviously best done at night. I know, that blew your mind, didn’t it? But there’s a bit more to it. We’ve talked a bit about light pollution, but even if you’re in a dark space with no artificial light for miles around you, there’s still one big source of light pollution in the sky, and that’s the moon. You’ll see the most stars on moonless nights, or nights when the moon rises late in the evening. Check out a moon calendar to find the date of the next new moon, and your local weather forecast to make sure it falls on a clear night, and you’ll have a truly stellar night of looking at the stars.

Other timing issues to take into account include the seasons—you’ll have the best view of the Milky Way, high and clear in the sky, if you stargaze during late summer and fall. Also, if you’re looking for specific constellations, some of them are only visible during certain parts of the year, and some can only ever be seen from other parts of the world. You might also want to be on the lookout for celestial events like meteor showers, comets, lunar eclipses, or planetary events, which can make for an exciting night of stargazing and even turn the event into more of a scavenger hunt or a contest.

Do I Need Equipment for Stargazing?

When it comes down to it, all you really need for stargazing are your eyes, but there are a few items that might make the experience more vivid. There are billions of stars in the night sky, and only a relative handful of them are visible to the naked eye, so if you’re looking to expand your stargazing experience, it might be a good idea to borrow or invest in a pair of astronomy binoculars, which are lightweight, relatively inexpensive, and will help you spot loads of stars you wouldn’t be able to see otherwise. 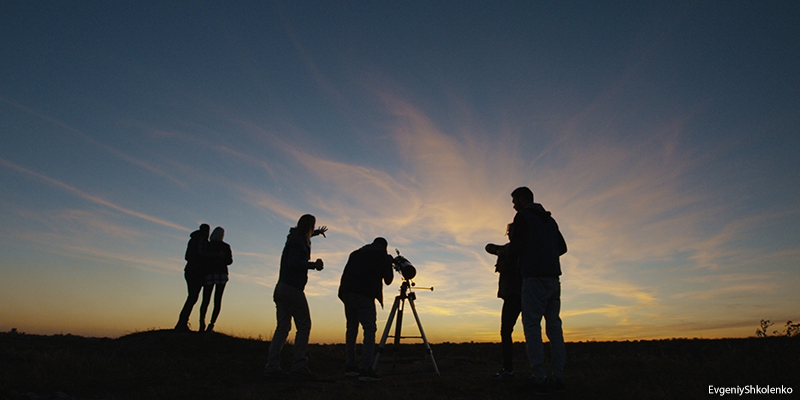 But if you’re looking for something specific in the night sky—say, a faraway galaxy or nebula, or a specific star, you might want to invest in a telescope, or see if you can borrow one from a friend. It’s a bigger cost, and you can definitely get a lot out of your stargazing without one, but if you’re serious about astronomy, it might be a solid investment to make. The tripod means you’ll be able to stabilize your view, because as much as you might think you have a steady hand, when you’re looking at something so far away, handheld binoculars are not going to cut it. There are numerous types of telescopes out there to suit a wide variety of budgets and needs, so do some research and decide which would be best for you.

One of the simplest and most accessible bits of equipment for stargazers is an astronomy app. Apps use GPS data to help you identify what you’re looking at in the night sky, be it a constellation you can’t remember the name of, a bright dot you’re pretty positive must be a planet, or an exact point in space for you to point your telescope so you can find a nebula.

What’s the Best Way to Stargaze?

There’s no real BEST way to stargaze in Colorado, because it all depends on your needs. Maybe you’re looking for a romantic evening with your special someone, so your best night might include a blanket, a stargazing app, and a quiet, open alpine meadow. Or maybe you’re getting really into the astronomy aspect of it all, and you want to check out an observatory to use their fancy telescopes. These choices are all up to you, but there are certainly a few tips and practices that will help you get the most out of your experience.

Did you know that the light of a flashlight can ruin your night vision for more than 30 minutes after you turn it off? That’s half an hour of wasted time you could be spending stargazing! Use a red light, like those often found on headlamps and camping flashlights, so you don’t wreck your night vision, or if you can, try to navigate in the dark to let your eyes fully adjust. If you don’t have a red flashlight, you could tape or rubber band a piece of red cellophane or paper over the top of a regular flashlight to create your own.

Don’t Forget Where You Parked

If you’re camping for the night, that’s one thing, but if you’re just driving out for an evening under the stars, make sure you drop a pin on your phone to remember where your car is parked, and keep an eye on your wandering so you don’t get lost in the dark. Use a trail when possible, and make sure you stop occasionally while walking so you can reorient yourself.

Use All of Your Senses

Part of stargazing is relaxation, and allowing yourself feel like you’re part of something bigger. Close your eyes for a minute, and listen to the sounds around you—maybe there’s the soft rush of a river or stream, or the hoot of an owl, or the call of a coyote in the distance. Spend a moment sharpening your senses of hearing, and smell, and then jump back into looking at the night sky. You might just find it takes your experience to a whole new level.

Some of the locations listed in this piece can get pretty busy at night, especially if there’s an eclipse or meteor shower, so be considerate of other stargazers. That means you should be especially careful when it comes to using lights, so you don’t ruin anyone’s night vision, and being aware of the noise you’re making. As always, you should plan to Leave No Trace when you leave for the night.