Telluride boasts a rich history and one of the West’s most iconic Victorian area mining towns. In the 1700s, the Ute Indians used the San Juan Mountains and the San Miguel River banks as summer camps. Explorers and survey parties passed through the area in the 1700s and 1800s, but it was the mining industry that brought the first European settlers in 1876 when the Sheridan Mine registered its operation in the Marshall Basin above Telluride. The mountains turned out to be loaded with zinc, lead, copper, iron and silver, but once gold was discovered, the boom was on. In a short, 20-year span, the town grew from a hodgepodge of cabins and shacks to rows of elegant Victorians and stately brick buildings. Today, many of the structures still exist, illustrating the rich history of the town while housing modern boutiques and restaurants. Telluride was designated a National Historic Landmark District in 1964, the highest level of historic status given by the US Secretary of the Interior. In an effort to protect the character and authenticity of the area, Telluride established the Historic and Architectural Review Commission (HARC), which reviews new building or remodeling plans before construction begins. Learn more about the Historic Walking Tour through the area’s storied past. Or, download the map and take the self-guided tour. 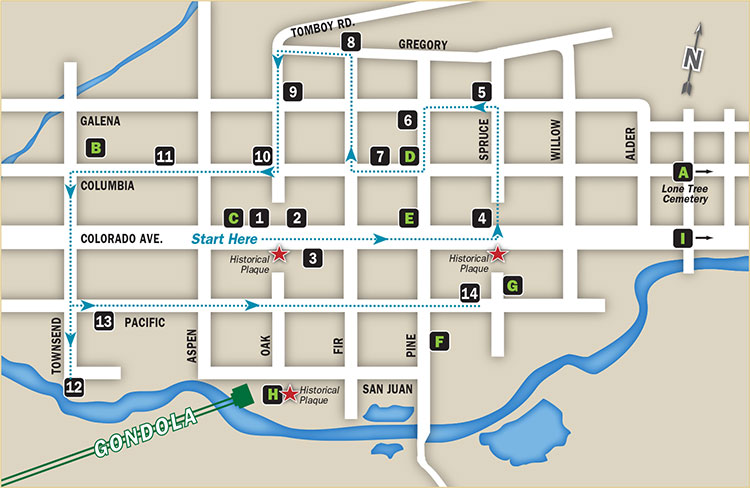 The courthouse was originally built on the south side of West Colorado Avenue in 1886 but burned shortly after construction. The bricks were saved to build the present courthouse less than a year later on the opposite corner (Colorado Ave. and Oak St.). Recently renovated, it is still in use today.

Built in 1891, Telluride’s first hotel was destroyed by fire in 1894 and rebuilt in brick in 1895. At the same time, the Sheridan Bar was built, and it is now one of the oldest bars in the West. The bar has remained unchanged since 1895, boasting its original lead glass divider panels, mahogany wood paneling and filigree light fixtures. Patrons are served beverages on the original hand-carved cherry wood bar that was imported from Austria. The New Sheridan was recently accepted as a member of the National Trust for Historic Hotels of America. In 1913, the opera house was added and named the Segerberg Opera House, after builders J.A. and Arvid Segerberg. The building was eventually named the Sheridan Opera House after its neighboring bar and hotel.

One of the oldest structures on Colorado Avenue, this building was home to the Pekkarine family. Mr. Pekkarine emigrated to the US from Finland in the late 1800s and opened a boot shop in the basement. On the second floor, he later operated a mercantile store. The Pekkarines lived on the third floor. At the settling of the Pekkarine estate in 1974, valuable artefacts were donated to the Telluride Historical Museum.

The Roma Building was home to one of the town’s oldest and most raucous bars. Now the Roma Bar & Grill, the downstairs still contains the original 1860 Brunswich-Balke-Collender Company bar, which is carved from walnut with 12-foot French mirrors. The building was most recently renovated in 2016.

Charles Delos Waggoner, president of the Bank of Telluride (yellow brick building with pillars on Main Street), contrived a scheme purportedly to save his bank in the Wall Street Crash of 1929. Waggoner, aka “Buck,” siphoned money from New York banks to keep his clients from losing their life savings once the Bank of Telluride could no longer pay its creditors. Waggoner testified in court, “I would rather see the New York banks lose money than the people of Telluride, most of whom have worked all their lives for the savings that were deposited in my bank.” Although rumored to be in Mexico or Canada, he was found in New Castle, Wyoming and had only $400 when he was arrested. Waggoner was sentenced to 15 years in prison but was paroled after six years.

The building was constructed on Fir Street and Columbia Avenue in 1883 as Telluride’s first schoolhouse. The one-room structure held one teacher and 53 students and was built for $3,000. After a new school was built, the town offices occupied the building.

Built in 1896 and named Hall’s Hospital after its first doctor – the building served as the community hospital treating miners and townspeople until it closed in 1964 due to a decline in the population. It reopened in 1966 as the Telluride Historical Museum and was renovated in 2002. Ten rooms and outdoor exhibitions showcase Telluride’s unique and vibrant history with a vast collection of photographs, artifacts and exhibitions.

Built in 1900, this house was a survivor of the 1914 flood that careened down Cornet Creek, sweeping through town and depositing mud and debris from the Liberty Bell Mine down to Colorado Avenue. One woman was killed and the Sheridan Bar was filled with mud halfway to the ceiling. This house has been completely restored to its original condition and is now listed on the National Register of Historic Homes.

E.L. Davis who built this stately brick house in 1894, was a mining and real estate entrepreneur. He held an early interest in the Bullion Lode as well as numerous mining claims in the Ingram-Bridal Veil Basin and Bear Creek area. He owned all the land where the former Rio Grande Southern Train Depot now stands, as well as one-third interest in West Telluride. Davis sought to bring business to the town as vice-president of the Telluride Board of Trade. After Davis’s death, the house was sold to Dr. Oshner, who used it as a hospital, particularly during the 1918 flu epidemic. The house was renovated in 1983.

On the corner of Aspen and West Columbia, this white Victorian was bought by L.L. Nunn who financed the world’s first commercial A/C power plant, the Ames Hydroelectric Generating Plant. Nunn purchased the home for his Telluride Institute, where “pinheads” from Cornell University came to expand their knowledge of the production of power. Today, Cornell University has a “Telluride House” funded by Nunn’s estate. Next door, on the corner of Aspen Street and West Columbia, is the house in which Nunn lived, which was built in 1887 and remodeled extensively in 1980.

Prior to the arrival of the railroad in 1891, oxen and mule trains, as well as horses, carried all supplies and ore into and out of the area. The introduction of the railroad created a bustling, noisy area surrounded by boardinghouses and warehouses, some of which still stand on San Juan Avenue. Ore was hauled out of the surrounding mines and became a major revenue generator for the Rio Grande Southern Railroad. The Depot, built of wooden siding and shingles, was restored in 1991 and today houses the Ah Haa School for the Arts.

This area was the center of social life for Scandinavian immigrants. On the south side of Pacific Street, Finn Town Flats (originally a boardinghouse), Finn Hall and the smaller Swede-Finn Hall (pictured, and now an Elks Lodge on the corner of Pacific and Townsend) hosted many parties and gatherings where families brought food, bands played and people danced and socialized. Continuing east, detour briefly up South Oak Street to the Dahl House, a miner’s rooming house built in the 1890s, now a private home.

The Senate, Silver Bell, Cribs and madam’s stone residences make up the restored buildings of Pacific Street’s “sporting district.” The Senate was one of the many places bustling with business between the 1880s and 1930s. The saloon and gaming room closed in 1935. The Silver Bell, built in 1890, suffered a disastrous fire in 1923. It operated as one of Telluride’s many “soda parlors” during Prohibition, and its numerous entrances hint at the other services offered there. It closed in 1959, was restored in 1991 and today houses many businesses. The three small Victorian houses standing in a row on Pacific Street, known as the Cribs, are all that remain of the “female boarding houses” that lined both sides of West Pacific Street all the way to Town Park. The Telluride Housing Authority saved these last cribs by renovating them in 1983.

A. Lone Tree Cemetery
The cemetery is located on the east end of town on Colorado Avenue and offers a glimpse into Telluride’s history and the perils of its residents during the mining-boom era when avalanches, murders, flu epidemics, mining accidents and labor strikes took many lives.

B. Telluride Elementary School
At the time of its construction in 1895, the building was considered to be the most modern of educational facilities. It was completely renovated in 1986, and an addition was built in 2000.

C. Galloping Goose
This curious hybrid of auto and train rode Otto Mears’ famous railroad line in the declining years of the Rio Grande Southern. On rails, the Galloping Goose made its last run in 1953. It is now the moniker of Telluride’s public buses.

D. Miner’s Union
Built by the Western Federation of Miners in 1901 as a result of a period of labor strikes and protests when unionized miners were denied health care at the local hospital.

E. Butch Cassidy Robbery Site
By most accounts, Butch Cassidy was a minor player in his first bank robbery of San Miguel Valley Bank in 1889. The old bank burned and was replaced by the Mahr Building in 1892.

F. Pick & Gad
Located in what was once Telluride’s red-light district, patrons were treated to music, food, wine and ladies in this brick “parlor house” if they wore a coat and tie.

G. Old Town Jail
This stone jail is thought to have been built in 1885 and is now occupied by the Telluride Marshal’s Department. The town’s first calaboose, a wooden structure, was built in 1878 and is now located in Telluride Town Park’s campgrounds.

H. Penn Tram Towers
At the turn of the century, the east end of the canyon was laced with the cables of aerial trams that lowered ore from the mines to mills. These towers were part of the Penn Tram which conveyed ore from mines above Telluride to the mills below.

I. Idarado Legacy Trail
Plaques along this interpretive walk recount the mining legacy of Telluride’s east end. The trail ends at the Pandora Mill site with a stunning view of Bridal Veil Falls.