The 101st Army Band, a unit of the Colorado Army National Guard that is now in its 80th year, consists of 35 citizen-soldiers whose occupations range from student to teacher and computer programmer to waiter. The Band members attend from as far away as Montrose and Greeley, Colorado to train intensively every month in Aurora. The mission of the 101st is to provide ceremonial music and musical entertainment on behalf of the State of Colorado and the United States Army. Colorado’s only Army band, the 101st features a variety of patriotic, jazz, popular, country, classical, rock, and Dixieland music, performed by seven different ensembles.

Parades, formal public concerts, school assemblies, clinics, music festivals, and television appearances are all part of the 101st Army Band’s schedule. Under the command of CW2 Russ Massey, the 101st Army Band presents its programs year-round to communities throughout Colorado and occasionally outside of the state. It has also performed with such groups as the Rocky Mountain Brassworks, the Metropolitan State College of Denver Wind Ensemble, the Adams State College Wind Ensemble, the 3rd U.S. Infantry Fife and Drum Corps (“The Old Guard”), The U.S. Army Band (“Pershing’s Own”), and the U.S. Marine Drum and Bugle Corps. The Band’s Dixieland ensemble has been a feature performer in the annual Memorial Day salute to Veterans at the Sacramento Jazz Jubilee since 2000.

Whether performing in the United States or representing our country as musical ambassadors overseas, the 101st Army Band entertains audiences of all ages and backgrounds with an exciting and diverse musical presentation. 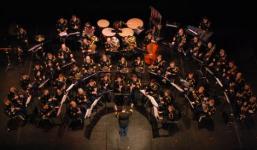