The 12th Annual Jared’s “Giant Pumpkin Festival and Weigh-off” is coming up and is expected to be bigger and better than ever. Jared’s hosts the largest pumpkin weigh off in the state with state records being set 8 times in the past 12 years.

This mostly free family event will be held Saturday Sept 30th at 10500 W. Bowles Ave. Littleton, CO. The event begins at 10am and will end approximately 5 pm with winners being announced and prizes awarded around 3-3:30pm. The day is capped off with a pumpkin drop from a crane about 100’ feet in the air and local bands playing till 5 pm (or later). In addition to the excitement generated wondering which pumpkin will be the heaviest, (The largest weighed was over 1500 pounds) there will be other activities for the children and adults. Bouncey castles and Face painting will be ticketed attractions. Galleria of Ghouls, straw maze, and water balloon tosses for the kids are free. Corn hole toss, jenga, hula hoops for the adults. And local food vendors, craft vendors, music and exhibitors for all. So come for the day or come at the end for the pumpkin drop (weather permitting, of course) 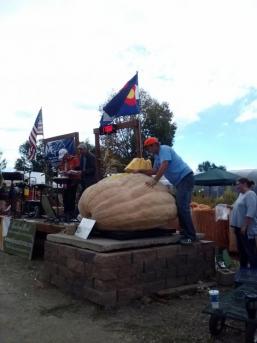