The Music! The Animation! The Voice-Over Stars!

Animaniacs is one of the most beloved and enduring cartoon shows and Animaniacs in Concert — performed by the original composer Randy Rogel and voice talents of Rob Paulsen (Yakko), Jess Harnell (Wakko) and Maurice LaMarche (Brain from Pinky and the Brain) — now brings its music to the Lincoln Center. Animaniacs in Concert is a wonderful show filled with hilarity, delightful animation, and great songs performed by original cast members.

Originally performed by a Hollywood studio orchestra of 40 musicians, Rogel's Emmy-winning songs will be presented by Wes Kenny conducting the CSU University Orchestra. 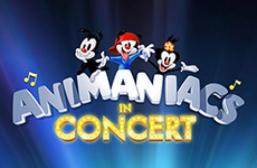