Anthem and Aria Present: The All-American Haunting (Séance at The Jester’s)

Anthem and Aria Present: The All-American Haunting (Séance at The Jester’s)

Inspired by seances conducted by fraudulent Victorian mediums, The All American Haunting is a blend of Illusion, Psychic Mystery, and Horror

PLAYING TWO NIGHTS ONLY! Inspired by seances conducted by fraudulent Victorian mediums, The All American Haunting is a blend of Illusion, Psychic Mystery, Horror, and Theatre.

It had been said that the building on the corner of 15th and Champa was haunted, but most brushed it off as superstition. However, recent supernatural activity has terrorized the tenants. The Haunting is Real.

To help investigate and perhaps eliminate the ghostly disturbances, paranormal investigators Anthem and Aria have been called in. Working as a team they’ve earned nationwide acclaim for their effectiveness. Hopefully they can supply answers and solutions to this paranormal infestation. However, when things go wrong, the investigation turns dangerous. Everyone must work together to put the dark spirit to rest with a seance.

Who are The Psychic Soulmates?:

Connected by their mutual love of the supernatural, Anthem and Aria tour internationally spreading macabre mystery and a message of cosmic connection. Working as equal partners they read minds, summon spirits, and touch hearts at colleges, on cruises, and in world class theaters. You've seen them in Las Vegas showrooms and on Hulu and America's Got Talent. Awarded Mentalist Of The Year, Best Variety Show, and the Lance Burton Award Of Excellence, you can expect a chilling and stunning night of ghostly illusions. 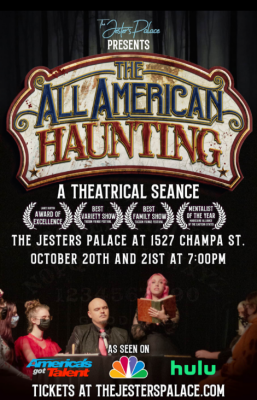