While casual observers may be awed by their Hollywood credentials, critics have been quick to note that the brothers – Michael on vocals, guitar and cello and Kevin on vocals, guitar and percussion — along with the band that’s been with them since the beginning — Paul Guzzone (bass, backing vocals), Joe Mennonna (keyboards, accordion), Ira Siegel (lead guitar, mandolin and backing vocals) and Frank Vilardi (drums) — eschew any hint of glitz and glamour in favor of an ethic gleaned from the hard lessons that come as a result of determination and drive.

The Bacon Brothers make their first appearance at The Historic Stanley Hotel in Estes Park with an exclusive 2-night only concert series on June 15th and 16th. This intimate performance in the Stanley concert hall (capped at a 340 seat capacity) gives fans a once-in-a-lifetime up-close and personal concert experience. 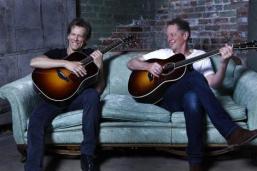