The Best of Second City on Tour

Chicago’s legendary sketch and improv comedy theater comes to town with “The Best of The Second City.”

Sherbino Theater and Weehawken Creative Arts are excited to bring the renowned Second City Touring Company to the Western Slope for 2 nights of comedy in "Best of Second City".

This must-see show features the best sketches and songs from The Second City’s history made famous by superstars like Tina Fey, Stephen Colbert, Steve Carell, Gilda Radner, Bill Murray and more--as well as their trademark improvisation.

Come see where it all began during this special 2 night engagement.

Fresh, fast and always spectacularly funny​,​ The Second City is celebrating nearly sixty years of producing cutting-edge satirical revues and launching the careers of generation after generation of comedy’s best and brightest.

The Best of Second City will be presented at Montrose Pavilion on July 1 for one show and at Sherbino Theater on July 2 for two shows. 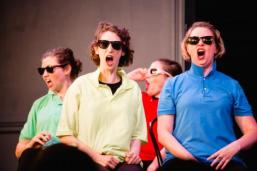