Blessed by the Best GOSPEL EXPLOSION

Celebrated, award-winning gospel singers Yolanda Adams and Marvin Sapp will visit Pikes Peak Center for the Performing Arts at 8 PM with their Blessed by the Best Gospel Explosion.

After 12 albums, five Grammys, and performing for several U. S. presidents, Adams still wows audiences all over the world. Ever since her 1988 debut album, “Just As I Am,” Adams has been renowned for pioneering the blend of modern gospel music infused with soul and jazz.

While she served as a lead singer with the Southeast Inspirational Choir in her native town, Houston, Texas, Adams caught the eye of the prolific composer/producer, Thomas Whitfield, who guided her first album. Her incredible talent and style served to have her hailed as the most versatile contemporary gospel singer since Aretha Franklin.

Marvin Sapp has been singing since the age of four and has shared the stage with many gospel notables. His vocal gift is celebrated across musical genres. Renowned for songs such as, “Sweeter as the Days Go By,” “Perfect Peace,” “Praise Him in Advance,” “The Best in Me,” and a dedication to his wife, “My Testimony,” Sapp has enjoyed a decorated music career that includes 10 Grammy nominations, 22 Stellar Awards, two Soul Train Music Awards, two BET Awards, two Dove Awards, and eight BMI songwriter’s awards. His mega-selling, “Never Would Have Made It,” held the No. 1 spot on both Gospel and R&B radio for more than a year, and has been among the most ubiquitous Gospel and R&B songs 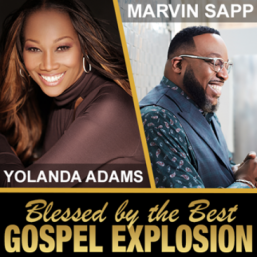