Of course, a full-time radio career hasn't stopped him from regularly hitting the stage alone as a stand-up comedian. It's a job he's enjoyed since his teenage years. It continues to be a welcome challenge, too, putting Bones face-to-face with his audience and eliminating his cast of on-air sidekicks.

"I'm up there alone, telling stories from my life and sharing observations from my warped mind," he says. "It's all about honesty and awkwardness. I can't react to something my partner has just said, because there's no one else up there with me. I love the challenge. I love running the risk of failing at something, because if you fail, at least it means you're trying." 2017 saw Bones launch his wildly successful "Funny & Alone Stand Up Comedy Tour" with more than 20 sellouts across the country. In 2018, he will again hit the road bringing a brand new show - and plenty of new jokes - to his fans with the "Bobby Bones Red Hoodie Comedy Tour." 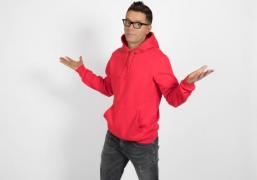