The “intellectually, emotionally and musically rich” (Star Tribune) men’s vocal ensemble Cantus is widely known for its trademark warmth and blend, innovatibe programming and its engaging performances of music ranging from the Renaissance to the 21st century. The Washington Post has hailed the Cantus sound as having both “exalting finesse” and “expressive power” and refers to the “spontaneous grace” of its music making.

As one of the nation’s few full-time vocal ensembles, Cantus has grown in prominence with its distinctive approach to creating music. Working without a conductor, the members of Cantus rehearse and perform as chamber musicians, each contributing to the entirety of the artistic process. This collaborative work style allows Cantus to be flexible, adaptive and ready to embrace new ideas. The performance—whether in a recording or in a live concert—is one that would be entirely impossible without the artistic involvement of the entire ensemble. 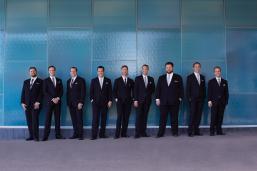