Don’t yet rejoice in his defeat, you men!
Although the world stood up and stopped the bastard,
The bitch that bore him is in heat again.
~The Resistible Rise of Arturo Ui, epilogue

Brecht’s shudderingly accurate parallel between Hitler and his henchmen on the one hand, and the old crime lords of Chicago on the other, is a vigorous eye opener that was produced on Broadway with Christopher Plummer. The Cauliflower Trust in Chicago is in need of help and turns to a racketeer by the name of Arturo Ui to begin a “protection” campaign. His henchmen look astonishingly like Goebbels and Goring. Their activities include “accidental” fires and a St. Valentine’s Day massacre.

Ghosts of Paul Muni, Jimmy Cagney, and Edward G. Robinson will be channeled with video clips of their famous gangster films Scarface, The Public Enemy, and Little Ceasar. 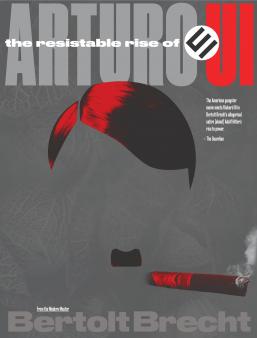