Comedy Hoe is a one woman show written and performed by comedian Jil Chrissie featuring comic Angelica Mackey. This bold performance weaves fictional storytelling with standup comedy and comedic spoken word to address the adversity and hyper-sexualization that women face in America daily. Comedy Hoe is a one of a kind public announcement of the impenetrable depth of womanhood expressed in a live performance of three different art forms.

Comedy Hoe was featured at the 2019 Black Women in Comedy Festival in NYC and will also be performed at the 2019 Hollywood Fringe Festival in June. Having twice sold out to private audiences in LA , Comedy Hoe promises to wildly challenge stereotypes using the universal language of humanity.

“The idea is to help change the global perception of women and sexuality while tackling weighty topics like substance abuse, mental illness and cultural vulgarity with every syllable.” – Jil Chrissie 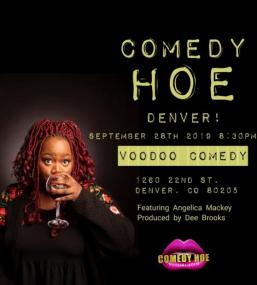