Daughtry is an American rock band formed and fronted by namesake Chris Daughtry, who was a finalist on the fifth season of American Idol. As the front man for the band bearing his name, Daughtry has become one of the most visible and consistent rock & roll torchbearers of the 21st Century. Since rising to prominence on the fifth season of American Idol, he has released four albums, all of which reached the Billboard Top Ten and have combined sales more than 8 million copies in the U.S.

"It takes a lot of time to accept who you are," says Chris Daughtry. "You shave off the persona that you thought people expected, stop worrying about what anyone is going to think. You start to be comfortable with who you are onstage and off, and that all blends together. I think I finally know who I am as a person."

Ten years after launching with a massive splash, Chris Daughtry claims that he and the band have grown the most on stage, and that it's altered his whole sense of his work. "When we first came out, I'd only known what I'd seen," he says. "I didn't know how to be vulnerable, with no pretense. Now it's walk onstage and, especially in our acoustic shows, just be flat-out honest and open. It's really helped me realize that's actually what fans want - they want 100 percent honesty and to feel like they got to know me better." 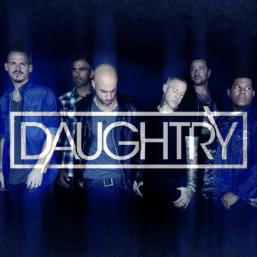