Award-winning country artist Easton Corbin will headline a star-studded lineup at Pikes Peak Center on Wednesday, July 11 for the final show of the 2018 95.1 NASH FM/Jon Eddy Productions (“JEP”) Concert Series.  The show will begin at 6:30 p.m. with opening acts, duo Walker McGuire and Jillian Jacqueline. This show will be one of several 2018 events put on by Jon Eddy Productions that will benefit The Empty Stocking Fund, a local non-profit operated by The Gazette and El Pomar Foundation to benefit 20 local non-profits in the Colorado Springs community.  Ten percent of each ticket sold will be donated The Empty Stocking Fund. Corbin’s latest single, “A Girl Like You” has been climbing the Billboard Charts for months and country music fans everywhere have been singing along as the single continues to hover near the top of the charts.  Corbin’s self-titled debut album released in 2010 spawned back-to-back hits “A Little More Country Than That” and “Roll With It,” making him the first male country artist in 17 years to have his first two consecutive singles reach No. 1.  Corbin set a career-best debut on Country Airplay with his top 5 hit single, “Baby Be My Love Song,” from his No. 1 debuting album “About To Get Real." The show will also feature two exciting opening acts, duo Walker McGuire, made up of Jordan Walker and Johnny McGuire, who’s brand new self-titled EP was just released January 12; and Jillian Jacqueline who released her latest album, “Side A,” in September 2017, and appeared on Late Night with Seth Myers in mid-January. 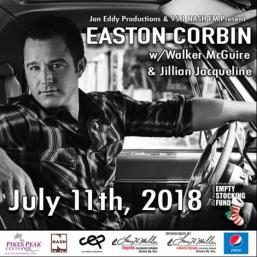