Elevated an Evening of Dance

Davis Contemporary Dance (Davis Dance) is excited to present “Elevated” our season eleven opening concert series. The program is jam packed with a variety of dance styles that speak to the heart and soul of the company. Presenting concert dance for audiences in Denver County and beyond the company prides itself on creating and presenting dance for seasoned theatre goers, and those new to a concert dance experience. All of this is made possible by SCFD, The Grace Family Foundation, and Jay & Debbie Stark. To elevate our “Share the Stage” program, the company will be presenting works by a Denver Dance favorite and modern dance staple The Hannah Khan Dance Company. Kahn’s company is one of Denver’s finest professional modern dance troupes and has been sharing its passion for dance with the Denver community since 1988. The Hannah Khan Dance Company will be performing two works on the program: “Take it All In” and “Closing In” both Choreographed by Hannah Kahn.

Davis Dance will round out the program performing two restaged Davis Dance classics “Pushed Passed the Line” by Founder/Artistic Director Terrell Davis which premiered in 2008 and ”Sicut in Caelo et in Terra” a work by Rehearsal Director Aubrey Klinger Fearns which premiered in 2016. Rachael Harding who has served as the company’s resident choreographer for the past three seasons will be premiering another new work on the company. The concert will end with a world premiere “Resilience” by Terrell Davis.

The performances will be held on January 25th & 26th at 7:30 pm, and January 27th at 4:30 pm at the Eliane Wolf Theatre located at 350 S. Dahilia Street Denver CO. 80246. Tickets are $20 - $30. Tickets can be purchased on line at www.tututix.com/davisdanceco or directly from the Davis Dance Facebook page. Join Davis Contemporary Dance Company in celebrating our elevated eleventh season of “Dance That Feeds Your Soul.” 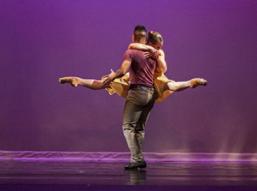