As seen on five episodes of ‘Masters of Illusion’ and with more than 8,000 performances at the MGM Grand in Las Vegas, Garry & Janine Carson have been awarded “International Entertainers of the Year 2019” by the International Magician’s Society, and also awarded “Family Entertainers of Las Vegas” two years in a row by the Las Vegas Review Journal.
Escape Reality starts right off with a bang with flying silks and curtains soaring through the air! It stars Garry & Janine Carson, direct from Las Vegas, and includes several dancers and showgirls accompanying them. The show will take you through a journey of escaping reality and entering into a magical realm, transporting your mind into a state of wonder. It involves magical appearances and disappearances, swords, saws, spears and even a snowstorm. Dancers emerge from a large storybook to a princess in a castle; jewels transform into a girl; objects morph from one place to another - this show is full of adventure from start to end! It’s magic you will always remember, entertainment you will never forget. 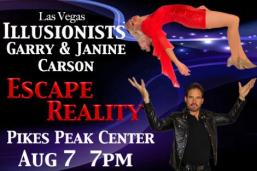