FRIENDS! The Musical Parody is the hilarious new musical that lovingly lampoons TV’s Friends - celebrating the wacky misadventures of your favorite group of 20-something pals as they navigate the pitfalls of work, life, and love in 1990s Manhattan. It’s a seemingly typical day at New York’s only coffee shop, Central Perk, until an unexpected runaway bride with beautiful hair enters the picture and kicks the whole gang out of second gear!

Twice extended since its opening in October 2017 and going strong, this delightfully naughty confection plucks the best moments from the show’s ten years and recreates the moments through an uncensored, fast-paced, music filled romp, winning over New York audiences along the way. FRIENDS! The Musical Parody, not only keeps you laughing, but tugs at the heart strings drawing audiences into stories we know and love. Will Rachel and Ross get together or won’t they? Will Monica ever find love? Will Joey have an acting career? Get your tickets today! 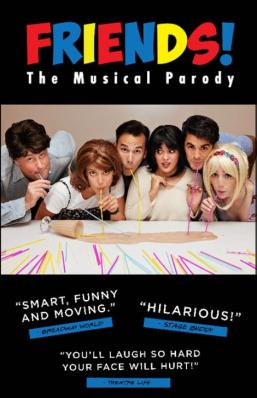