Hops Drops, previously known as Evergreen Music Festival, is celebrating its 32nd year with specialty food vendors, activities for kids, and a groovy music lineup- announcing a national header later this month. Join us for a never-before-seen experience in the Evergreen: a craft beer & live music lovers paradise!

Rooted in Evergreen's long history of supporting the arts, Hops Drops is a non-profit organization and 10% of its proceeds will benefit the Rocky Mountain Academy of Evergreen. Hops Drops was previously known as Evergreen Music Festival, which celebrated its first year in 1966. The festival started with the intent to bring classical music to the mountains and thirty-two years later, Logan and Riley Boone, along with Maruc Durante, Bobby Everett, and Colin Kerr have joined forces to create a refreshed and modernized look for the Colorado music & entertainment scene.

The music lineup includes Heavy Diamond Ring, Rapidgrass, The Wrecklunds, Jestus and The Limits, Extra Gold, Jesh Yancey and The High Hopes, Drew Dvorchak and Friends, YepOK, and a national headliner who is to be announced later this month. 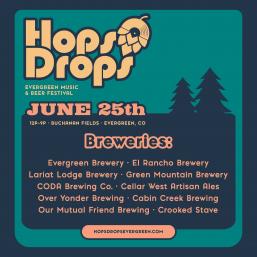