No one can make moms feel as uncomfortably normal as Hensley and Smedley. With more than 1.5 million followers on social media and 120 million views of their web series in less than 2 years, the Nebraska natives blend of honesty and humor resonates with moms and dads alike, proving these two have become the hottest tickets in town. One of their most shared episodes - I Swimsuit Season So Hard, which featured the moms trying on the summer's hottest/most ridiculous swimwear - garnered more than 20 million views and coverage in the world's top news outlets. The duo's #IMOMSOHARD book made The New York Times Best Sellers List, and their stand-up special is streaming on Amazon Prime. The moms have appeared on a number of national TV shows, including The Today Show and The Doctors, and were chosen for People Magazine's Best of 2017.

Kristin Hensley and Jen Smedley are the comedy duo #IMomSoHard. With a hugely popular web series on Facebook, these two best friends - and moms - talk the good, the bad, and the funny about motherhood, friendship and beyond. The Nebraska natives both have two small children and two regular-sized husbands, so logically, their web series could only take place in a playroom with red wine. Or mimosas. Or chardonnay. A lifetime of teaching, performing, and writing comedy, mashed up with holidays, birthdays, and football Saturdays can only culminate in hilarious, and sometimes too true, stories that have struck a nerve with so many parents. The live performance will reflect the casual conversations about motherhood that have made their series so popular. 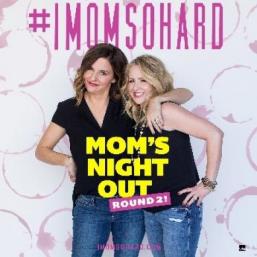