Jay Leno may be best known for dominating late-night television for almost two decades from behind the desk of The Tonight Show, but he got his start as one of the most creative comedic voices of the '70s and '80s. Come celebrate Lincoln Center's 40th Anniversary with Leno's legendary laidback, everyman-style of standup.

As if night-time dominance were not enough, Leno has also succeeded in the newest entertainment arena. “Jay Leno’s Garage” of which he is a producer as well as star. The NBC creation, which is viewed on CNBC, gained an international following on the Web, not to mention an Emmy Award and two additional nominations for Outstanding Special Class–Short-Format Nonfiction Programs. Leno, himself, is the recipient of the People’s Choice Award and other honors, including the Harris Poll selection as most popular star on television. Other personal highlights include his induction into the Academy of Television Arts and Sciences’ Broadcasting Hall of Fame, his 2014 reception of the John F. Kennedy Center for the Performing Arts’ Mark Twain Prize for American Humor, the Hasty Pudding Award at Harvard University, an honor whose sole prior comedy/talk host recipient was Johnny Carson and an honorary doctorate from his alma mater, Emerson College. Like Mr. Carson, Groucho Marx and an elite group of entertainment figures, he has been invited to have his papers installed in the Library of Congress. He also received a star on Hollywood’s Walk of Fame (asking that it be placed in front of the Ripley’s Believe It Or Not Museum since is where he was arrested for vagrancy when he first arrived in Hollywood. He also has set several land speed records and became the first person to drive the pace car of all major NASCAR events. 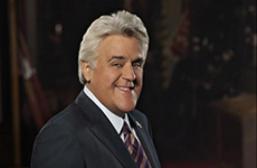