Join The Legendary Pink Dots (LPD) and Orbit Service for the first of two nights in Denver on their 2022 "The Museum of Human Happiness Tour" with The Drood, Mudwulf and DizyPixl performing live at The Mercury Cafe starting at 8pm.

The Legendary Pink Dots (LPD) are an Anglo-Dutch experimental rock band formed in London in August 1980. In 1984, the band moved to Amsterdam, playing with rotating musicians and having, as core members, singer/songwriter/keyboardist Edward Ka-Spel and keyboardist Phil Knight. As of 2012, the group is composed of Edward Ka-Spel (vocals, keyboards, songwriter), Phil Knight (keyboards, electronics), Erik Drost (guitars) and Joep Hendrickx (live sound engineer). Although outside the mainstream, LPD have released more than 40 albums, have a devoted worldwide following, and tour frequently.

The Drood is an Electronic-Rock band from Colorado who pull creatively from the fringes of Post-Rock, Psychedelic, Shoegaze, Industrial and more. Their music conjures an other-worldliness intensity which seeks to speak to the soul; a fascinating overlap of mysticism and skepticism, inspiration and despair. 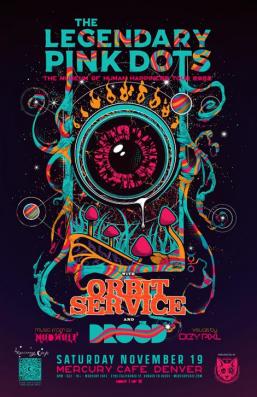