Les Ballets Trockadero de Monte Carlo was founded in 1974 by a group of ballet enthusiasts for the purpose of presenting a playful, entertaining view of traditional, classical ballet in parody form and en travesti. Les Ballets Trockadero first performed in the late-late shows in Off-Off Broadway lofts. The Trocks, as they are affectionately known, quickly garnered a major critical essay by Arlene Croce in The New Yorker, and combined with reviews in The New York Times and The Village Voice, established the Company as an artistic and popular success. Tickets $30, $24 Members. 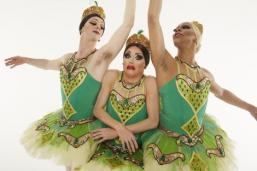