Following two sold out nights in November, 2016 at The Stanley, five-time Grammy Award-winning singer-songwriter and Nashville Songwriters Hall of Fame inductee Mary Chapin Carpenter is excited to come back to Estes Park where she ended her 2016 performances by saying, “This has been so much fun.  I’ll see you next year!”  And indeed she will, for two nights November 10th and 11th at the Historic Stanley Concert Hall as part of the “Stanley Live Concert Series.”  Beloved by fans and critics alike, Carpenter has sold recorded 14 albums and sold over 14 million records.  She will be performing songs from expansive catalog and new songs from her latest record, The Things That We Are Made Of, released in mid-2016. 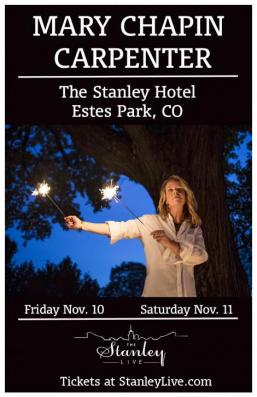