Native American Fetishes | Second Floor Foyer
This exhibit will feature Native American fetish carvings donated by John Peters. Zuni Fetishes were thought to be so powerful by the U.S. Government that in the late 1800's Frank Hamilton Cushing was sent out to the Zuni Reservation to live among the Zuni people and investigate and study the mysterious power of the Zuni Fetishes. His task was to see if they were a possible threat to the U.S. Government and the country. His research & findings along with primitive drawings of fetish carvings can be found in what is now published as a book entitled "Zuni Fetishes" by Frank Hamilton Cushing. They are believed to be so powerful and beneficial to your well-being that a Directional Fetish Carving set carved by Navajo Fetish carver Roy Davis and his brothers Herbert and Jeff, was sent into space aboard the space shuttle "Endeavor" in 1994. Zuni Fetishes were first used as early as 650 A.D. The fetishes that have been in Zuni tribal possession or in individual possession for centuries are considered to be the most holy and powerful fetishes as well as the more valuable fetishes. Although many southwest tribes carve fetishes, the Zuni Fetish carvers are generally acknowledged as doing the finest work among all of the tribes. Navajos will barter for Zuni Fetishes of sheep, cattle or goats to help keep their herds and flocks healthy and ensure propagation. Admission $8 Adults, $6 Children, Military, and Seniors 65+. Arts Center Members always free. Wed-Sat 11AM – 4PM, Sun 12 – 4PM. 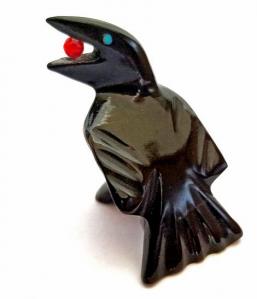