Not Made for TV: A Sketch and Stand Up Comedy Show

DENVER FRINGE FESTIVAL PRESENTS: Not Made For TV

Derek Walton is a stand-up and sketch comedian that has been featured in the Denver Westword.

Edward Bell is a stand-up comedian originally from rural eastern Iowa, now living in Denver, CO. He has written for the Hard Times. He regularly performs at comedy festivals around the country sharing the stage with big names like Adam Cayton-Holland, Steph Tolev, and Nick Youssef. He used to live in a van, but now he doesn't. There were too many complaints.

Austin Black is a comedian originally from Iowa and now resides in Denver, Colorado. No one cares that in his six years of performing he has performed in multiple comedy festivals such as Denver Fringe, Floodwater, Green Gravel, and finished top five in the “Funniest Person in Iowa Contest” at Penguin’s Comedy Club. He was also a finalist in the Clean Comedy Contest at Comedy Works. 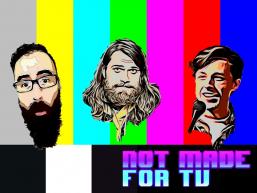