The Office! A Musical Parody

Dunder Mifflin is opening an office near you!

Producers of the sold out, unauthorized Off-Broadway sensation The Office! A Musical Parody and Pikes Peak Center for the Performing Arts are excited to announce that the North American tour based on the popular TV show will stop in Colorado Springs on March 24, 2020.

It’s a typical morning at Scranton’s third largest paper company until, for no logical reason, a documentary crew begins filming the lives of the employees of Dunder Mifflin. Don’t miss this hilarious, unauthorized parody of everyone’s favorite TV show.

“[It’s] the world’s most elaborate inside joke, created with a whole lot of love, just for fans,” commented Mashable. 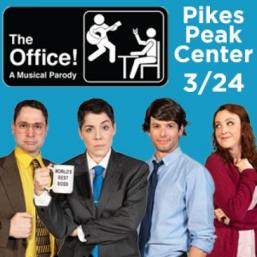