Peppino D'Agostino emerged on the musical scene in the late 1980’s and helped redefine the boundaries of the acoustic guitar. His virtuosic technique, penchant for open tunings, and percussive effects are the basis of his unique compositional style. Add to that his natural warmth, playfulness, and broad musical tastes and you have the recipe for what he calls “minestrone music”.

His album, Every Step of the Way, was named one of the top three acoustic guitar albums of all time by Acoustic Guitar magazine. Since his debut recording in his native Italy, he has performed in more than two dozen countries, been featured at prestigious international music festivals and performed in world renowned venues including the Kolner Philarmonie in Cologne. He frequently plays with prominent artists including Tommy Emmanuel, Leo Kottke, Martin Taylor, Andy McKee and Eric Johnson. Peppino D’Agostino has released 17 albums. 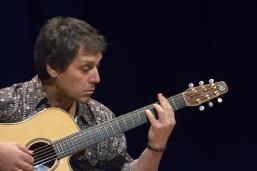