Grammy-nominated, internationally renowned master of the diatonic harmonica, PT Gazell’s music is hot, swingin’, smooth, original, clean, lyrical, masterful and one of a kind. Oh yeah, like what? Think Nat King Cole, Benny Goodman, Louie Jordan, Ben Webster, Sweets Edison, Tiny Moore, Wes Montgomery...that's what! The Nashville artist's unique approach to the harmonica as the lead instrument delivers great new takes on Jazz Standards, Swing Classics, Jump Blues, Ballads, and American Songbook Selections. Unlike any other player, PT is proof that the harmonica is capable of much more than what most expect or believe possible. His combination of phrasing, melodic style, song choices, and improvisational abilities may draw comparisons to others, but in the end, it’s a style all his own. Dig it!

PT says he likes to think of his performances as “an on going musical conversation between myself and my audiences.” Listen to the music he delivers and you’ll agree he is an exceptionally compelling and articulate speaker.

Music fans, do yourself a favor and check out the one night only PT Gazell & The Side Effects special Denver performance.

What people are saying about PT’s new CD: “A Madness To The Method.” “It’s said that Benny Goodman, the King of Swing, had no instrumental bias. Had PT Gazell and his half-valved diatonic been around during that time, Benny would have embraced both the player and the instrument … because PT swings that hard.” Paul Messinger ~ Jazz Aficionado magazine.

“A Madness to the Method” is a masterpiece not only for harmonica players but jazz and music loving folks alike. Rob Paparozzi ~ The Blues Brothers 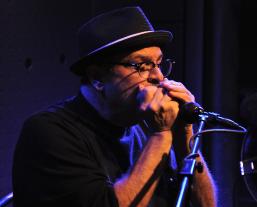