Join all your favorite Rocky Mountain Stars such as Anaya, Curtis Cole, Filter, Allie Gato, Mercury Yaden, and many more as we premier a monthly event the likes of which the pro-wrestling world has never before seen. Join us as we broadcast live on Twitch.tv and tape for television on the Global Wrestling Network as well as Fight Network U.K. See live, in action, as he makes his Rocky Mountain Pro return, former Lucha Underground Champion Marty "The Moth" Casaus with his sights set on the historic unveiling of the first ever Twitch Championship! Selling out fast. Get tickets today! 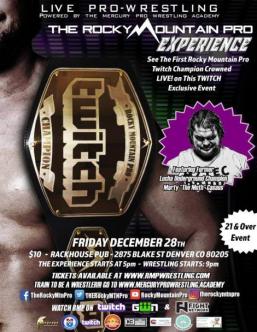