Getting blog love from Kanye West and tweets from Diddy himself — Boothe’s sixth icon in his series — it’s clear that he’s getting the attention of the right people. In an industry where your live show can make you or break you, Shaun Boothe is renowned for his conceptual and highly interactive performances – many of which have graced the opening stages of concerts for multi-platinum artists, including Nas, Lauryn Hill, Talib Kweli, and Snoop Dogg. 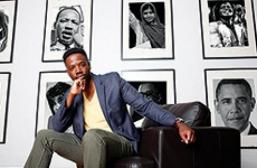