Through the Looking Glass

On January 28, Pro Musica welcomes cellist Meta Weiss to the stage for Haydn’s lively Cello Concerto in C. Haydn was the inspiration for the piece that begins the program, Entr’acte by Caroline Shaw. Ms. Shaw wrote the piece in 2011 after hearing a performance of one of Haydn’s op. 77 string quartets, music that she said “suddenly takes you to the other side of Alice’s looking glass, in a kind of absurd, subtle, technicolor transition.” The program ends with Mozart’s Symphony No. 29, one of the last pieces he wrote before striking out on his own in Vienna. 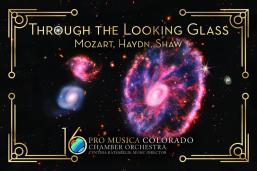